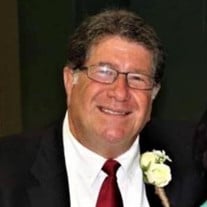 Leonard Augustus Wood III was known as “Woody,” to most. He was born March 18th, 1953, in Jacksonville, Florida to Leonard Augustus Wood II and Nona Wood. Not long after, his father, a Master Chief in the US Navy, was stationed in Guantanamo Bay, Cuba. They lived there until 1961 when they moved to Arlington, Virginia. He met Carol McClung, the love of his life at Yorktown Highschool and graduated in 1971. Right after his graduation he enlisted in the US Navy and went to the Naval Academy the following fall. He remained in the Navy until 1974. He married Carol in March of 1973 and they went on to have 3 daughters. He worked for the Architect for the Capitol in Washington D.C. for 9 years. His favorite job, which he always said he was the worst at, was at Dudley Martin Chevrolet, for which he worked for one year. He then went on to work for Charles Wood Builders for 22 years. He was a Deacon at Emmanuel Baptist Church, which he attended for 31 years. He and Carol moved to Palm Coast, Florida in 2012 to be closer to their children and grandchildren. He worked for Flagler County Schools until 2020, when he began working for CEC corporation. He was a member of First Baptist Church of Palm Coast for 9 years. He sang in the church choir and played in the Praise Band. He was an electrician and an all-around handyman. When something was not working like it should, you called Woody. He loved cars and even built a three-wheel car in his late 20s. He passed this love on to his grandsons and worked on cars with both. He had a passion for music, playing the piano and saxophone along with singing which led him to write his own music and lyrics. He passed this passion on to his entire family and often sang with them in the church choir and ensembles. He absolutely adored his family, but most of all, he loved the Lord. He was a light that burned bright for all who met him. Leonard is survived by his loving wife, Carol, 3 daughters: Wendy Seward (Tim), Tammy Jackson, Molly Harich (Fred), a brother: Scot Wood, a sister: Lisa Mathews, 2 grandsons: Matthew Jackson and Jacob Seward, 3 granddaughters: Christine Jackson, Ashley Jackson, and Audra Seward, and two great-grandchildren.

The family of Leonard A Wood III created this Life Tributes page to make it easy to share your memories.

Leonard Augustus Wood III was known as “Woody,” to most. He was...

Send flowers to the Wood family.