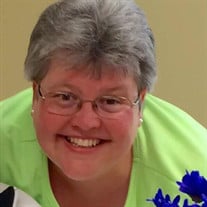 Lisa L. Vaughan, 48, of Palm Coast, FL passed away unexpectedly at her home on November 14, 2016. Lisa was born in Battle Creek, MI on August 3, 1968. She graduated from Harper Creek High School and attended Kellogg Community College. Lisa loved sports. As a youngster, she was involved in a floor hockey program and in high school played on the fast pitch softball team for 4 years. She played in several different pool leagues. In 1992, Lisa went to the National Singles Tournament in St. Louis, MO. and in 1994 and 1999 she went to Las Vegas, NV. for the National Team Tournament, placing 3rd place both times. Lisa loved photography, writing, poetry, drawing, painting, and fishing which was her favorite thing to do. She moved to St. Augustine, FL. in 2000 and started working for Park Place, now named Brookdale. She was selling rooms from the showroom in the parking lot of the plaza while the building was still under construction. Lisa always called it “Her Building”. After the building was opened she worked at the front desk and then later was promoted to activities director. She was loved and respected by management and her peers, but what meant the most to her was the residents, “Her” residents, she loved them and they loved her. Lisa was preceded in death by her father Duane R. Vaughan. She is survived by her mother Marlene K. Callender Kramer Vaughan of St. Augustine, her loving partner of 16 years Laura E. Folk of Palm Coast, brother Robert Kevin (Mercy) Kramer of Milford, DE, sisters Cynthia S. Kramer of St. Augustine, and Diana K. Kramer of Burlington, MI. nephews Derrick and Kevin Jr., and niece Marissa. Lisa’s life will be celebrated on Saturday, November 26, 2016 at 10:30AM at Brookdale: 150 Mariner Health Way Street, St. Augustine, FL. 32086. Heritage Funeral and Cremation Service is assisting the family.

The family of Lisa L. Vaughan created this Life Tributes page to make it easy to share your memories.

Send flowers to the Vaughan family.