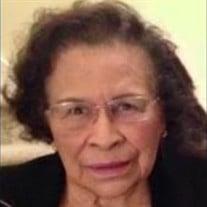 Lydia Maria Paoli Pacheco, 86, passed away peacefully at Stuart F. Meyer Hospice House in Palm Coast, Florida on January 15, 2022 after a short illness. Lydia was born on February 17, 1935 to the late Andres Paoli and Antonia Pacheco in Santa Isabel, PR. She was raised by Emilio and Maria Zayas (her aunt and uncle who were also her Godparents after her parent’s early death). She proudly graduated from Pontifical Catholic University of Puerto Rico in Ponce at a time few women even attended college. She began her teaching career in the public school system which spanned over 30 years. She married the love of her life, Reginald L. Norris Jr., in 1966 and relocated to Rosario, Argentina for a number of years followed by relocation to Coatzacoalcos, Mexico. Another job relocation eventually returned them to Ponce, Puerto Rico. Lydia became a young widow in 1974. As a single parent, Lydia embraced the challenges and financial adversities of raising a child by herself. Passionate about her Catholic faith, she was seen at Mass every Sunday and made sure to pass the faith on to her only child. In advance of her passing she received the Sacrament of Anointing of the Sick. The embodiment of the dedicated grandmother, Lydia, or as she was fondly called “Dada,” moved in with her daughter and son in law as soon as her first grandchild was born. She dedicated herself to making homemade baby food, reading Spanish books and singing Spanish songs to her two grandsons. Once they started school she would pick them up in the afternoons and have a snack ready for them before she monitored their homework. A communicator at heart she never seized to repeat herself over and over “because that is how people learn”. She was tough but loving and her spirited personality will be missed along with her many sayings and facial expressions. Lydia is survived by her daughter, Louise Norris Davies; son in law, Bret Davies; grandsons, Kyle and Rhys. She was preceded in death by her parents, husband and brother. A funeral mass will be held on February 4th at 11:00 AM in the Holy Spirit Chapel of Holy Family Catholic Church in Clemmons, NC. A bereavement service will immediately follow. A private interment will be held later in the day. Memorial donations may be made to Stuart F. Meyer Hospice House, 150 Memorial Medical parkway, Palm Coast, FL 32164 or to St. Jude’s Children’s Hospital. Heritage Funeral and Cremation Service is in charge of her arrangements.

The family of Lydia Maria Paoli Pacheco created this Life Tributes page to make it easy to share your memories.