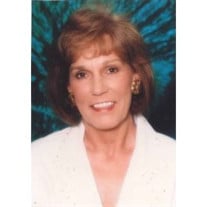 Margaret Ann Clothier Margaret Ann Clothier (née Rowe), age 67, passed away on October 11, 2012 in Palm Coast, Florida surrounded by loving family and friends. She was born on March 14, 1945 in St. John’s, Newfoundland, Canada to Kathleen Rowe (née Stanley) and the late Maxwell Rowe. Margaret was called "Shirley" by family and friends, while her adoring husband called her "Maggie." Margaret moved to Florida in 1977 from Newfoundland, Canada. Every summer she returned to Newfoundland to visit family and watch the whales in the bay. Then when the whales left, she would too; returning to spend winter in Florida. She enjoyed crocheting, reading, playing scrabble, and collecting Hummels. Rug hooking was her real passion; she drew her own designs and was a member of the Rug Hooking Guild of Newfoundland and Labrador. Margaret also enjoyed spending time with her best friends the “YaYa Sisters." She loved her family very dearly, especially her grandchildren whom she called "grandbabies." Throughout her life, Margaret (Shirley) enjoyed working with people. As a young woman, she was a psychiatric aide at The Waterford Hospital in St John’s, Newfoundland. Later, she managed Mary Brown’s restaurants in Central and Avalon regions of Newfoundland. When she moved to Florida, she became a regional manager for Taco Bell. Following a personal passion, she moved into retail management, specifically jewelry! And finally, she became a nail technician, where she formed lasting friendships with many of the women who came into the salons where she worked. Margaret is preceded in death by her father Maxwell Rowe and brother Kevin Rowe. She is survived by her loving husband of 18 years Robert Clothier; son John Orren and wife Kristin of Orlando, FL; daughter Kimberly Orren of Gainesville, FL and fiancé Leo Hearn of Newfoundland; her stepchildren Sandy Michaud and husband Tony, Rusty Zimmerman and wife Lisa, Todd Clothier and wife Cristi; her mother Kathleen Rowe of Newfoundland; her brothers Alfred Rowe and wife Marilyn, David Rowe and fiancé Hazel Rideout, Roger Rowe and wife Louise, Maxwell Rowe and fiancé Magreta Stagg, and Frederick Rowe and wife Stella; her sisters Linda Mills and husband Ralph, Debbie White and husband Wayne, and Catherine Parrell and husband Mac; grandchildren Lloyd and fiancé Jenn, Daniel, Samantha, John, Kaitlyn, Gabe, Chrystian, Chad, Kinsey, Ashley, Taylor, Noah, and Seth; her special friend aunt Ivy Rowe of Newfoundland; and numerous nieces, nephews, aunts, uncles, cousins, brothers and sisters-in-laws. In lieu of flowers, donations may be made in Margaret’s name to Susan G. Komen for the Cure of Central Florida by visiting http://centralflorida.info-komen.org/site/TR/Events/DAB_CentralFloridaAffiliate?pxfid=241945&fr_id=1290&pg=fund Memorial services will be held on Thursday, October 25, 2012 at 3 pm at Heritage Cremation and Memorial Chapel 620 Dunlawton Ave. Port Orange, FL 32127.  Friends may visit with the family from 2 pm until time of service.  Services will also be held in Newfoundland next summer and announced at a later time.

The family of Margaret Ann Clothier created this Life Tributes page to make it easy to share your memories.

Send flowers to the Clothier family.