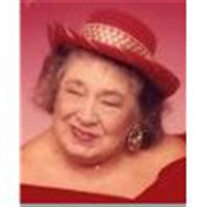 Mary Frances Morris Mary Frances Morris was born January 2, 1927 in New York, NY and passed away July 20, 2012 in Port Orange, FL at the age of 85 years with her loving family by her side. She was under the professional care of Halifax Health Hospice of Volusia County. She was the beloved daughter of Mary Dimidas Ossipinsky and John J Ossipinsky. She grew up in Brooklyn, New York and was a WWII Cadet. She lived in Cambridge, MD with her husband Richard W. Morris and her daughters.  While living in Marlland she attended St Mary's Refuge of the Sinners Catholic Church. She was an active member in the St Mary's ladies group for over 20 years and also a lioness with the Cambridge Lions Club. Mary moved to Daytona in 1981 to be with her family.  She was very proud to be the Matriarch of 5 generations of women. She belonged to Our Lady of Lourdes Catholic Church and Our Lady of Hope Catholic Church, and was a member of the OLH Women’s club. Mary is survived by her daughters, Marianne Morris Lane, and Jan Maria Morris, three grandchildren, Theresa Terry, Trista Arnold, and Dominic Thomas Lane, and her six great grandchildren, Krystle Arnold, Samantha Terry; Elena Terry, Teamer Terry IV, Zachary Terry, and Chandler Lane, her 1 great great granddaughter, Kenadie M. Arnold, her grandson-in-law, Teamer Terry III, and her granddaughter-in-law, Darcy Sweeney. Mary was preceded in death by her brother, John J. Ossipinsky and her sister, Ann Adomovitz. Her surviving sister is Frances Palumbo, and children, Thomas Palumbo, Peter Palumbo and Patty Dibble. In Phoenix, AZ, her sister in law Vincenza Ossipinsky Wilson , children, Mary Jo Polimeni, Susan Villano, Vincenza Fuchs, John Ossipinsky, and Stephen Ossipinsky and families. Memorial donations may be made in memory of Mary to the Halifax Health Hospice of Volusia/Flagler, 3800 Woodbriar Trail, Port Orange, FL 32129. Arrangements are under the care of Heritage Cremation & Memorial Chapel.

Mary Frances Morris Mary Frances Morris was born January 2, 1927 in New York, NY and passed away July 20, 2012 in Port Orange, FL at the age of 85 years with her loving family by her side. She was under the professional care of Halifax Health... View Obituary & Service Information

The family of Mary Frances Morris created this Life Tributes page to make it easy to share your memories.

Send flowers to the Morris family.