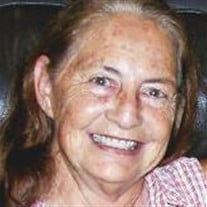 Maycile Pamela (Pame) Meaders Bosman 09/13/1951 - 10/21/2018 Maycile Pamela (Pame) Bosman of Bunnell, Florida, passed away on Sunday, October 21, 2018 with her family by her side. Pame was born on September 13, 1951 in Jacksonville, Florida and grew up in Volusia County. She graduated from DBCC in 1974 in Ornamental Horticulture and began working for ICDC in Palm Coast on the golf course the same year. Pame was the first female to work in the Maintenance Department and later became a crew foreman of the Beautification Crew until 1990. She met Blair Bosman in 1974 while working for ICDC, they married in 1977 and moved to their west Flagler County property in 1978 and began to build their homestead. In 1989, Pame received her Journeyman Certificate in Landscape Maintenance where she was named Overall Apprentice of the Year. Pame and Blair began their own landscaping business in 1990 which they maintained for twenty-four years, specializing in utilizing native Florida species. Not only did Pame and Blair develop their log homestead to live and to raise their two boys, they sculpted their property into an Eden of open and private areas reflecting a love of nature and style of an Old Florida, thoughtful of the intriguing specimens of flora and fauna which they loved and were devoted. Truly an artist, Pame translated through poetry, stained glass, art, photography and other art forms, a view of the world which escaped the eyes and senses of many. In a feast of translucent color, form, metaphor and simile, Pame recorded the sights and feeling of a fading Florida she knew; of giant live oaks, Spanish moss, sun, seas and breezes with her vision and idea of a world that is and she dreamed it could be. She translated those hopes into reality and framed them with the creative woodwork of her husband. In love and grace, always thinking of her family and those friends about her, she gifted them with many of her handcrafted treasures of quilting or sewing or woodworking as well as her signature and artistically framed pieces of her stained glass with illuminated poetry. Pame was a past member of; the Rough Riders of Flagler County; Cub Scout Den Leader, 1993-1996; past member of the German Shepherd Club of Daytona Beach, and bred German Shepherds for forty years; past member of a local poetry club, attending many open mics in Florida and Massachusetts; a current member of Steel Roses, a women's group that raised funds for school children and the American Cancer Society. She received numerous awards in mixed media from art shows, and awards in poetry. She is survived by her husband of 41 years, Blair of Bunnell, Florida, sons, Beau (Kim) of Ormond Beach, Florida, Troy (Hiromi) and grandson Atticus of Leicester, Massachusetts, brother Barney Meaders, Ormond Beach, Florida, and sister Mary (Mia) Gerber, (Jonathan) Bunnell, Florida. Pame was predeceased by her sister Elizabeth Landry and half-sister Letitia Honeycutt. The family will receive friends and relatives at 11:00 AM at the Princess Place Preserve Pavilion for a time of fellowship and fond memories. Further information may be obtained at Heritage Funeral and Cremation Services at 7775 S. US1, Unit D in Bunnell, FL. 386-437-6566.

The family of Maycile P. Bosman created this Life Tributes page to make it easy to share your memories.

Send flowers to the Bosman family.