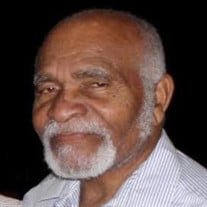 Melbourne Hardstorph Jackson, 88, passed away on August 31st, 2021, in Palm Coast, Florida. Born on April 21, 1933, in St. Andrew, Jamaica to the late Leonard & Luedeviene Jackson. As a devoted son he grew to be a fatherly figure, a pillar of influence, a loving husband, dedicated father, loyal brother, supportive member of the community, entrepreneur, and an active member of the Seventh Day Adventist Church. Melbourne was a generous man who loved the finer things of life and made every effort to ensure his wife and children were well supported. This same energy, love and devotion was expressed towards his many siblings, nieces, nephews and just about anyone in need. He enjoyed family gatherings, games, and fun times but especially enjoyed displaying his domino skills and took great pleasure in defeating any contenders brave enough to challenge him. He really loved that game and would occasionally play the night away. As a youth his love for the outdoors led him to the study of agriculture with a special interest in agronomy and would enjoy every opportunity to add flowering plants and fruit trees to his garden. With a love for the ocean he enjoyed taking his boat out on fishing expeditions and pleasure trips while living in Jamaica. He migrated to Ft. Lauderdale, FL in 1980, and then worked in New York continuing his professional career as a plumber for many years with his three brothers. He retired in 2004 relocating to Palm Coast, Fl. Melbourne was preceded in death by his son Robert Donovan (Bobby), his granddaughter Sameca Kerry-Ann, his brother Keith Jackson, sisters Mavis Skinner, and Pamela Kelly. He is survived by his beloved wife of 62 years, Olive (Wright), two daughters, Arlene Eleanor Jackson (Ms. A ) (Mark, S.O.); Joy Angela Hamilton (Derrick). Grandchildren, Justin Melbourne Donavan Jackson (Anya); Nicole Baker (Danny); Jannell Anya McGhee (Courtney); Derrick Hamilton, Jr.; and Natalie Hamilton. Great Grandchildren Cairo Calese McGhee and Nicolai Jackson. Brothers, Oscar Jackson (Bea); Roy Jackson (Sybil); Johnny Jackson (Beverly). Sisters, Pearl Spence; Maureen Assent (Antonio); Valda Jackson; Charmaine James. Melbourne will be honored with a celebration of life on Thursday, September 9, 2021, at the Palm Coast SDA church. Visitation will begin at 10am with services to follow at 11 am. Additional visitation has been scheduled for Wednesday evening, September 8, 2021, between 5 pm & 7 pm at the funeral home listed below. Heritage Funeral and Cremation Service of Palm Coast, Florida is assisting the family.

Melbourne Hardstorph Jackson, 88, passed away on August 31st, 2021, in Palm Coast, Florida. Born on April 21, 1933, in St. Andrew, Jamaica to the late Leonard & Luedeviene Jackson. As a devoted son he grew to be a fatherly figure, a pillar... View Obituary & Service Information

The family of Melbourne Hardstorph Jackson created this Life Tributes page to make it easy to share your memories.

Send flowers to the Jackson family.