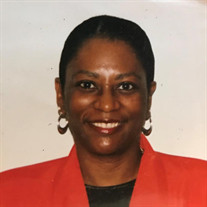 Melva Jean Cunningham-Floyd, daughter of Willie and Evalia Cunningham was born on April 2, 1954 in Cleveland, Ohio and departed this life on February 24, 2022 at the age of 67. Melva grew up in Maple Heights, Ohio where she graduated from Maple Heights High School in 1972. She attended Ohio State University where she received a Bachelor of Arts Degree in 1976. Melva met the love of her life, Walter Floyd, and they were joined in matrimony on September 22, 1979. The couple was married for 42 wonderful years. Melva was employed by TJ Maxx and became a district manager. She loved working in retail, particularly in the areas of fashion and accessories. She retired from TJ Maxx in 2013 after many years of service. Melva and Walter became entrepreneurs after purchasing a Molly Maid franchise in 2013. She served as president of their business. Over the years, Melva touched the lives of so many, always leaving a lasting impression. She helped with Hosea Feed the Hungry in Atlanta, Georgia and she served as a mentor for youth programs. Melva, also known as Mikki, enjoyed shopping and was always impeccably dressed. She treasured spending quality time with her family and friends. She also liked to travel. Melva was a hard worker and a prime example of a successful woman. She was well spoken and had a beautiful melodic speaking voice. She lived a full and rich life and was able to accomplish most of her goals. Mikki was loved by many and she will be missed. Melva was preceded in death by her parents, Willie and Evalia Cunningham and a brother, William Cunningham. To cherish her memory, she leaves behind her devoted husband, Walter Floyd, her sister, Dr. Phyllis A. Cunningham-Hutson, a niece, a nephew, cousins, other relatives and friends

Melva Jean Cunningham-Floyd, daughter of Willie and Evalia Cunningham was born on April 2, 1954 in Cleveland, Ohio and departed this life on February 24, 2022 at the age of 67. Melva grew up in Maple Heights, Ohio where she graduated from Maple... View Obituary & Service Information

The family of Melva Jean Cunningham Floyd created this Life Tributes page to make it easy to share your memories.

Send flowers to the Floyd family.