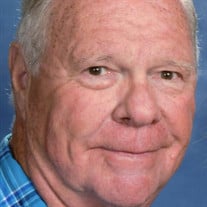 MICHAEL ANTHONY SMITH, 78, passed away at his home in Flagler Beach, Florida, on July 22, 2021, with family members at his bedside. Michael was born December 15, 1942, in Ellsworth, Kansas. He received a baccalaureate degree in history from Kansas Wesleyan University, and attended graduate school at the University of Kansas. He is survived by his wife of 57 years, Patricia, and their two children and their spouses: Timothy and Jill Smith, Purcellville, VA, and Julie and Jay Hepler, Prairie Village, Kansas. Michael is also survived by three grandchildren: Quincy and J. P. Hepler, Prairie Village, Kansas, and Jessica Aydelotte, Forney, Texas; and four nieces and nephews. Michael was preceded in death by his parents: John Wesley and Alta Jean Hardy Smith; his brother John Steven Smith; his paternal grandparents, Roy and Marie Smith; and, his maternal grandparents, Harold and Myrtle Hardy. Michael had a passion for storytelling and creative writing and published eight novels, a book of essays, and a three-act stage play. He believed “lucky people find something to do that makes their heart sing.” In addition to his career as an author, Michael worked for several Midwestern newspapers as a reporter, columnist, editor and editorial writer, specializing in coverage of politics and education. He also was an Associate Director for the Illinois Board of Higher Education; Press Secretary to U.S. Congressman Dick Durbin, now senior U.S. Senator from Illinois; and Vice President, Public Relations, for the Futures Industry Association in Washington, D.C. As a reporter for the 7th Army Training Command newspaper in Grafenwoehr, Germany, 1992-93, among other subjects, Michael wrote about the plight of refugees from the Balkan wars. The family plans a celebration of Michael’s life in the fall.

MICHAEL ANTHONY SMITH, 78, passed away at his home in Flagler Beach, Florida, on July 22, 2021, with family members at his bedside. Michael was born December 15, 1942, in Ellsworth, Kansas. He received a baccalaureate degree in history from... View Obituary & Service Information

The family of Michael A Smith created this Life Tributes page to make it easy to share your memories.

MICHAEL ANTHONY SMITH, 78, passed away at his home in Flagler...