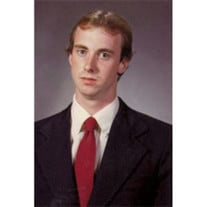 Mitchell F. Foley Mitchell F. Foley, of Port Orange, FL was born on June 11, 1965 in Baltimore, Maryland. He passed away on October 28, 2012 at his residence in Port Orange, FL at the age of 47 years. He was a graduate of Calvert Hall College in Baltimore, MD, and he received a Bachelor’s Degree from the University of Maryland. Mitchell worked as a Landscaper, and he enjoyed playing Hockey. He is survived by his mother and step-father, Joan and Bill Norton of Port Orange, FL. Father, John J. Foley of Vero Beach, FL. Brother, Michael Foley of Baltimore, MD. Step-brother, Mike Norton and wife Jill of Mishawaka, IN. Nieces, Chole and Elena Norton of Mishawaka, IN. Numerous aunts and uncles in both the United States and Great Britain, and many friends of TBPA. Memorial donations may be made in memory of Mitchell to the Calvert Hall College High School, 8102 Lasalle Road #9  Towson, MD 21286 or to the Hospice of Volusia/Flagler, 3800 Woodbriar Trail, Port Orange, FL 32129. Mitchell was preceded in death by his brother, Mark Foley. All arrangements are under the care of Heritage Cremation and Memorial Chapel, Port Orange, FL.

The family of Mitchell F. Foley created this Life Tributes page to make it easy to share your memories.

Send flowers to the Foley family.