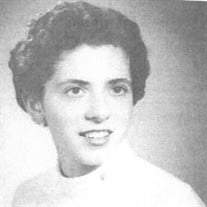 Molly Blackshaw passed away peacefully on December 12 from complications of kidney failure at the Stuart F. Meyer Hospice House in Palm Coast, FL. Born in Rockville Centre, NY, she grew up in Merrick, NY. Molly graduated from W.C. Mepham High School in Bellmore, NY, where she was active in a cappella choir, drama and dance performances, setting the stage, so to speak, for a lifetime interest in the performing arts. Possessed of an excellent soprano voice, she sang in church choirs during her early years, and when not doing that, often was a very prominent singer in the congregation. A lifetime Episcopalian, she was active in church affairs to include Vestry service. Molly attended Miami University in Ohio where she was a member of Kappa Kappa Gamma sorority. Having taken French throughout high school and in college, she became very proficient in the language, a little-known fact to most people, which became evident when many years ago during a visit to Quebec, she was able to readily converse in French with street vendors and others in the city. During her life Molly lived in eight different states: NY, CA, NC, WV, NJ, CT, ME, and FL. Her life was family centered, and she inevitably played the lead role in making the adjustments when moving to new locales. She especially treasured the time she spent in Maine, a state she found exquisitely scenic and tranquil. For many of the years that she resided in Morgantown, WV, and possessing a flair for fashion, Molly was employed in a now almost bygone era women’s wear store. She excelled at decorating the store-front show case windows, and built a reputation for ensuring that mature ladies were always spiffily dressed for whatever the occasion called for. Baseball, dogs, reading, classical and pop music, and travel, when possible, became passions in Molly’s life. Her baseball favorites were the Brooklyn Dodgers, Pittsburgh Pirates, and Boston Red Sox, dependent on where she was living at any given time. She was also a big Pittsburgh Steelers fan. A voracious reader, who sometimes would finish two hard cover books a week, Molly especially was drawn to romantic novels, and mystery and spy thrillers…her favorite books being anything written by Daniel Silva. She enjoyed attending concerts in venues ranging from the Hollywood Bowl to Lincoln center in NYC, to Heinz Hall in Pittsburgh, and to outdoor parks for July 4th pops events. Molly had a wry sense of humor and a keen discernment for distinguishing between the sublime and the ridiculous. Molly’s survivors include her loving husband of 65 years, Lance, whom she married in 1955; three children: Nancy (Blackshaw) Schuster (husband Neil) of Saco, ME; Lansing Blackshaw of Chambersburg, PA, and John Blackshaw (wife Michele) of Charlotte, NC; two grandsons: Aaron Blackshaw (wife Lauren) of Mint Hill, NC, and Tyler Blackshaw (wife Jessica) of Matthews, NC. She also is survived by her sister Nancy Dedrick of Merrick, NY, and was predeceased by her parents Murray F. Dedrick and Fanny Olive Fawcett Dedrick. As pandemic circumstances permit, a memorial service will be held for Molly at Trinity Episcopal Church in Seneca Falls, NY, sometime in late spring or early summer 2021. Burial will follow the service in the Town of Rhinebeck Cemetery in Rhinebeck, NY, where Molly’s family has possessed a plot since 1852.

The family of Olive "Molly" D. Blackshaw created this Life Tributes page to make it easy to share your memories.

Molly Blackshaw passed away peacefully on December 12 from complications...

Send flowers to the Blackshaw family.