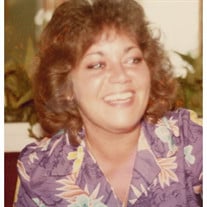 Onalee Gildo Onalee Gildo, 62, of Port Orange, FL passed away November 15, 2014 at the Hospice center in Edgewater, FL. Onalee was born in Detroit, MI and moved to the Daytona Beach area from Dearborn Heights, MI in the early 70’s where she and Kenwood Beatty opened up Dino’s Pizza on Broadway in Daytona Beach.  Onalee went on to open up two more Dino’s, one in Daytona Beach and another in Port Orange. In the 80’s she changed the name of her last pizzeria to Gildo’s breaking away from the Dino’s franchise. After selling Gildo’s, Onalee waitressed at different restaurants until the late 90’s when she became employed by the United States Postal Service. She worked for the postal service in the Daytona plant until its closing, she then moved to the Lake Mary plant and most recently worked in Palm Coast as a window teller. Onalee enjoyed bowling and was a competitive bowler sponsoring several leagues in the 80’s.  She loved spending days at the beach and passing time playing frisbee with her family and friends. She was also an avid cook and always dreamed about opening another restaurant with her daughter. She was an amazing woman with so much strength and a huge heart. She touched many lives during her life and will be greatly missed. Onalee was preceded in death by her brother, Michael Gildo and her father, John Gildo. She is survived by her daughter, Alisha Heath (Ashley), Port Orange, FL, mother, Eleanor Gildo, TN, sister, Carol Juarez (Edward), TN. A memorial service for Onalee will be held at 2:00 pm on Monday, December 8, 2014 at the Estate on the Halifax. In lieu of flowers, please make donations to the American Brain Tumor Association (http://www.abta.org) or Halifax Health Hospice of Volusia/Flagler. Arrangements are under the care of Heritage Funeral & Cremation Service, Port Orange, FL.

Onalee Gildo Onalee Gildo, 62, of Port Orange, FL passed away November 15, 2014 at the Hospice center in Edgewater, FL. Onalee was born in Detroit, MI and moved to the Daytona Beach area from Dearborn Heights, MI in the early 70&#8217;s where... View Obituary & Service Information

The family of Onalee Gildo created this Life Tributes page to make it easy to share your memories.

Send flowers to the Gildo family.