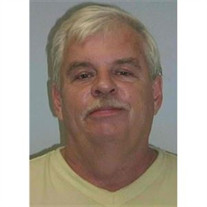 Patrick James Heeney Patrick James Heeney, 65, of Port Orange, FL, passed away on August 13, 2012 at his residence. He was born on August 13, 1947 in Ontario, Canada to Donald and Evelyn Heeney nee Berry. He was the eldest of 5 children. Patrick moved to Florida in 1993 with his 2 daughters, spending time in Missouri as well as Tennessee before returning to Florida and his love of the Ocean. He had bravely fought his illness for almost 3 years, before loosing the battle on his 65th birthday. He was a strong man who beat the odds time and time again. His personality plus his depth of caring for his family knew no boundaries. In his afterlife he will be reunited with his father, Donald, his sister Kathy, and his precious grandson, Angel Isaac. Patrick is survived by his son, James Heeney, daughters, Rebecca Harding and Kaitlin Clark, his loving mother, Evelyn, his brother Michael, two sisters, Sandra and Marnie, as well as six grandchlidren, Jordan, Kydah, Noah, Ivy, Nikolai, and Hanna, and his dear friend, Denise Morrill. His ashes will be scattered at the family cottage on Danford Lake in Canada where he has had so many wonderful happy memories. All arrangements are under the direction of Heritage Cremation and Memorial Chapel, Port Orange, FL.

The family of Patrick James Heeney created this Life Tributes page to make it easy to share your memories.

Send flowers to the Heeney family.