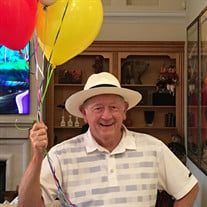 Paul Douglas Shipley passed away comfortably and peacefully on August 19, 2021, surrounded by family, in Palm Coast, Florida. Paul was born in Chattanooga, Tennessee on January 10, 1937, to the late Paul Cornelius and Elma Elizabeth Shipley. Paul was loved by everyone who met him. His quick wit, love for life and contagious smile will forever remain in their hearts. He was voted, “Most Popular” by his senior class of 1955 at Eustice High School and remained friends with many of his classmates throughout their lives. Paul met Loretta in 1957 and it was love at first sight. They married a year and a half later and had four children which they always referred to as the blessings of their lives. Paul attended the University of Florida and remained a huge Gator fan throughout his life. He also attended the University of Virginia when he was in his mid 30’s and earned a degree in Banking Law. Paul was the Vice-President of Barnett Bank on Park Avenue in Winter Park, Florida and later was promoted to Executive Vice-President of Barnett Bank and oversaw all the loan departments on the SE coast of Florida. Paul was a lifetime member of the Elks club and he and Loretta loved to have dinner and dance to the live music there. They were marvelous dancers and the people on the dance floor would often step aside and give them room to, “Light up the dance floor!” Paul had a musical side as well and was a self-taught banjo, harmonica, and guitar player. He and Loretta loved singing with their family, children, and friends. Paul was a devout catholic and would stop by every morning on his way to the bank and pray. Paul is survived by his loving wife of 63 years, Loretta, their four children, Mike, Brad, Greg, and Dana. Eight grandchildren, 22 great-grandchildren, and two great-great grandchildren. His family was blessed beyond measure to have Paul as their daddy, grandfather, great- grandfather and great-great grandfather. He will be forever in their hearts, and they will always have a huge grin and loving laugh when they think of him. A personal note from his family: Rest in peace dear Paul. We will carry on your amazing legacy, and you will forever be known by all your future family, and they will too grin and loving laugh as they are told of the amazing person you were and the wonderful life you lived.

The family of Paul Douglas Shipley created this Life Tributes page to make it easy to share your memories.

Paul Douglas Shipley passed away comfortably and peacefully on...

Send flowers to the Shipley family.