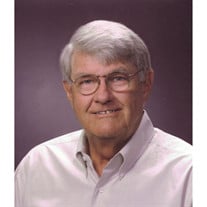 Peter "Pete" Charles West Peter Charles West passed away on Thursday, October 17, 2013 at The Health Center of Daytona Beach after a very long illness. Peter “Pete” West was born at St. Vincent’s Hospital in Montclair, NJ on August 5, 1935 to James Robert West and Marie Schreiner West.  The family lived in northern New Jersey until 1948 when they moved to Naperville, IL. In 1953, Peter graduated from Naperville High School where he was on the football team.  He was selected All-State end and received a college scholarship.  He attended the University of Illinois, in Champaign, IL and later joined his family in suburban Detroit, Michigan.  He met his first wife, Phyllis Jakeway West at the R. P. Scherer Corp., Detroit Michigan, where they both worked.  Pete and Phyllis settled down in Warren, Michigan where each of their four children were born. Peter attended night classes while working full time to support his family and subsequently earned his Electrical Engineering degree.  He later moved his family to Delaware, OH and then to Hollywood, FL where he worked with his Father–In Law in the commercial laundry equipment business. In the late 70’s, Peter, then a single man, expanded his business to the Daytona Beach area where he earned the respect of many of the areas hoteliers on the beach.  Also through this business, he formed lifetime friendships with many business owners in the community. In June, 1988, through a friend, Pete met Shirley Singleton Elliott, widow of Jimmie L. Elliott.  Peter and Shirley married in the courthouse in Santa Fe, New Mexico on February 14, 1992 while on a ski trip to Taos, New Mexico.  Peter had taken up snow skiing at the age of 50.  Shirley called him “the slowest skier on the mountain”, but he never took a fall. Pete & Shirley’s annual ski trips took them to Beech Mountain, NC, Snowshoe, WV, Park City, Utah, Breckenridge, Colorado and Lake Tahoe, CA. Lake Tahoe was where they found the perfect spot for their annual trips out west in February of each year. Together they made 7 consecutive trips to Incline Village. Pete was also an avid golfer and continued to play golf with his many golfing buddies as long as he was able to do so. His favorite golf courses were in the North Carolina Mountains and each year on his birthday, that is where he hoped to be.  His favorite golfing stories were that he once birdied the famous 17th Island hole at the TPC Sawgrass course.  He also loved the trip he and Shirley and Shirley’s son Steve & wife Kristine made to the practice rounds at The Master’s Course in Augusta. Just being on the course was so very special to Pete.  He also was thrilled when he recently received in the mail an autographed photo of Arnold Palmer. Pete was an amazing man who loved to talk with anyone he came in contact with.  He always had a joke to tell or a story that he remembered from his past.  His many friends loved him and were usually willing to listen to his stories multiple times. He also was always eager to form new relationships with new friends.  Most of all he loved his family and he felt very blessed that his children and grandchildren enjoyed visiting him often. Pete attended real estate school in 1992 and worked with Adams, Cameron & Co., REALTORS as a Commercial Sales Associate until he was forced to retire in 2010 due to his failing health.  This new career brought him the opportunity to use his sales skills he learned in his early years when he sold hospital equipment and laundry equipment.  Most of all of his real estate customers became great friends to Pete. Peter is survived by his loving wife of 21 years, Shirley Elliott West, the Mother of his 4 children and his dear friend, Phyllis West of Grovetown, GA, four daughters; Kimberly Sue West (George) of the Florida Keys, Nancy Lynn Castillo and husband Joe of Evans, GA, Sondra Lee Castle (David) of Grovetown, GA, Kimberly Brubaker (Brad) of Daytona Beach, FL, two sons; David West of Grovetown, GA, and Stephen Wendig and wife Kristine of Gainesville, FL, his two brothers, James Robert West (Marianna) of  Ft. Worth, TX, and Michael P. West of Arlington, TX, and a sister, Katherine E. West of Dallas, TX.  Also surviving are thirteen grandchildren;  Rebecca Einzig and husband Evan, Alaina Anson (Roberto), Chad Anson and wife Gina, Joey Castillo (Jessica), Nikki Castillo and fiancé Nick, Corey Castillo, Adam Castle, Brett Castle, Stephanie Wendig Lewis and husband Jon, Justin Wendig and wife Danielle, Christopher Kelley and wife Jessica, Brooke Brubaker and Nicole Brubaker.  He also leaves behind nine great grandchildren; (the newest one), Camren Castillo, Logan Lewis, Braiden Lewis, Kynslie Wendig, Zachary Einzig, Max Einzig, Lukas  Wishork, Jordan Kelley and Christian Kelley, and one nephew, Brad Lauderback. In lieu of flowers, donations may be made in Pete’s name to Halifax Health Hospice of Volusia/Flagler, 3800 Woodbriar Trail, Port Orange, FL 32129.  The family would like to thank them for the loving care they showed Pete over the last year and five months. A memorial service to celebrate the life of Peter Charles West will be held at 3:00 pm on Friday, November 8, 2013 at the Central Baptist Church, 152 Fairview Ave., Daytona Beach, FL 32114. All services are under the direction of Heritage Funeral & Cremation Service, Port Orange, FL.

The family of Peter Charles West created this Life Tributes page to make it easy to share your memories.

Send flowers to the West family.