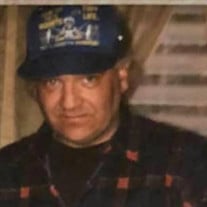 One day after his celebrating his 67th birthday, Peter E. Sisco III, of Palm Coast, FL passed away unexpected on December 28, 2021. “Skipper” was born on December 27, 1954 in Paterson, NJ to Peter E. Sisco, Jr. and Marjorie (Van Dyke) Sisco. Peter grew up in Haskell, NJ. When he was 12, he met Abbie Stefancik while still in grammar school. They were inseparable from that point on, and married on March 25, 1973. Those who knew Skipper best remember him as quiet and easy-going. If you were on his good side, you were good. He was also a free spirit and enjoyed “classic rock”, most notably when he hitchhiked 85 miles to the Woodstock Music Festival at the age of 15. He absolutely loved being outdoors, especially when he was hunting or fishing. Peter was also a passionate fan of NASCAR racing. For a many years, he was an over-the-road truck driver. He enjoyed the chance to travel throughout the United States, especially in his final few years on the road, when their kids were grown and Abbie was able to join him. Skipper was proud of his American heritage as part of the Ramapough Munsee Lenope Nation. Growing up in a large family, he was definitely a family man. Abbie and his three boys; Peter IV, Robert, and John were the center of his world. He cherished the opportunity to have quality time with family whenever he could. Skipper also loved playing with the kids in the extended family, and always made time for numerous nieces and nephews as well. There always seemed to be extra room on a four-wheeler for them, too. Peter is survived by his wife of 48 years, Abbie; his sons Peter IV, Robert, and John; his brother Cliff and sisters Vivian and Amy. He also had 10 brother-in-laws, 10 sister-in-laws, and 7 grandchildren, and a large number of nieces and nephews. Peter was predeceased by his parents Peter, Jr. and Marjorie, as well as his brother, Robert. Skipper will be deeply missed by numerous family and friends. The family lovingly requests you to enjoy a margarita or two in his honor, preferably with your toes in the sand. Heritage Funeral and Cremation of Bunnell, FL is assisting the family. www.HeritageFlagler.com

One day after his celebrating his 67th birthday, Peter E. Sisco...

Send flowers to the Sisco family.