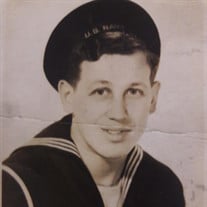 Ralph F. Deabrunzzo, 96, of Palm Coast, FL passed away peacefully with Dolores (Murphy), his wife of 70 years, at his side on May 8, 2018. He was born in Pittsburgh, PA on May 23, 1921 to Frank and Mary (Muszynska) Deabrunzzo. Ralph was a proud World War II Naval veteran. He belonged to the Disabled American Veterans (DAV) of Palm Coast. Ralph's diligent work ethic served him well during his 40 year tenure as a bottler at the Pittsburgh Brewing Company. Family and friends will remember Ralph as the hardest working man they knew. His passion in life was simply to "make everything better", a living example for everyone that came in contact with him either personally or professionally. He was a man of many talents, seemingly skilled at just about anything he put his mind to. He particularly enjoyed remodeling and rebuilding his numerous homes. Growing up in Pittsburgh, Ralph was also an avid fan of Pittsburgh's professional sports teams- and often could be found emphatically supporting the Steelers, Pirates, and Penguins. Above all, Ralph was a devoted and loving family man. He is survived by his wife Dolores; his son Ralph (Johnna) Deabrunzzo Jr.; daughters Nancy (Gary) Thomas and Sandy Wesolek; his grandchildren Lisa (and the late Chris) Strong and Ralph (Melissa) Deabrunzzo III; along with his great grandchildren Arianna, Sierra (Strong), Sophia, Ralph IV, Franco (Deabrunzzo), Stanley IV, Steven, Calvin (Himelinski), Isla (Thomas), his nieces and nephews from Pittsburgh; and his beloved parrot, Houston. In lieu of flowers, the family has two simple requests that they know Ralph would enjoy if he were still physically here among us: Hug your children and those most dear to you, and to never stop thanking the veterans you come in contact with for their selfless service. Heritage Funeral and Cremation Service is assisting the family. www.HeritageFlagler.com

Ralph F. Deabrunzzo, 96, of Palm Coast, FL passed away peacefully with Dolores (Murphy), his wife of 70 years, at his side on May 8, 2018. He was born in Pittsburgh, PA on May 23, 1921 to Frank and Mary (Muszynska) Deabrunzzo. Ralph was... View Obituary & Service Information

The family of Ralph Frank Deabrunzzo created this Life Tributes page to make it easy to share your memories.

Send flowers to the Deabrunzzo family.