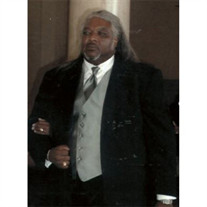 Rev. Charlie Robinson Rev. Charlie Robinson of Port Orange, FL was born on December 6, 1949 in Bishopville, FL to the late William Dannelly and Julia Robinson and passed away October 6, 2014 at home in South Daytona, FL at the age of 64 years. Rev. Robinson began  his primary education through the Lee County school system and continued his education through a Masters degree from Morris Brown College, Atlanta, GA. He and is wife Norma were united in marriage on November 5, 1971 and spent 43 years loving years as husband and wife. Together they raised their seven children, which is one of the many legacies he has left behind. He and Norma relocated to South Daytona, FL from Columbia, SC where he continued to serve the Lord as a Pastor of Restoration Anointed Ministry in the Daytona Beach area. His call as Pastor was to restore the anointed ministers back to their rightful positions in God. He set the bar for his family and led by example. He supported his family with hard work as a brick mason and whatever else it took with perseverance, love and devotion of family and the character for which he was known for. Rev. Robinson was a member of Masonic Lodge and Omega Psi Phi. As far as his outward appearance, he was known for large stature, his “Dad” scent that he was recognized by his children. In addition to his parents, he is preceded in death by his sister, Betty Corely. Rev. Robinson is survived by his wife, Norma Robinson of Port Orange, FL, sons: Troy Nelson, Rondell Nelson and Jerome Nelson; daughters; Marcella Davis, Vanessa Scott, Victoria Robinson-Livingston and Monica Phillips. He also leaves behind sisters; Willie Mae Muldrow, Joyce Robinson and Karen Stevens. Last but not least are his grandchildren; Cortney Nelson, Quintin Nelson, Charles Nelson, Joseph Davis, Donovan Livingston, Nathaniel Phillips, Devin Livingston, and Nicholas Phillips, and great grand children; Lily Nelson and Caylin Davis. In lieu of flowers the family has requested donations to his wife, Norma Robinson. Funeral services will be conducted 1:00 pm Friday, October 10, 2014 from the chapel of Heritage Funeral & Cremation Service, Port Orange, FL. Visitation will be held from 11:00 am until the the time of service. Interment will follow at Woodland Cemetery, Port Orange, FL. Friends and family may leave thoughts and condolences at www.HeritageDaytona.com All funeral arrangements are under the care of Heritage Funeral & Cremation Service, Port Orange, FL.

The family of Reverend Charlie Robinson created this Life Tributes page to make it easy to share your memories.

Send flowers to the Robinson family.