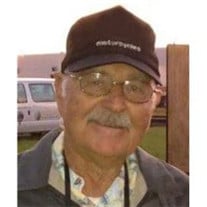 Richard “Uncle Sam” Lanternier Dick Lanternier, age 90, fondly known as Uncle Sam, a 60 year resident of the Daytona Beach area, passed away at home, March 23, 2015. He was born in Buffalo, NY, to the late Louis A. and Martha (Nuss) Lanternier on August 4, 1924. He was one of 4 sons and attended Riverside High School.  Dick enlisted in the army at the age of 17.  He is a veteran of WWII and participated in combat in 5 major campaigns as well as played clarinet and sax in the 421st ASF band.  After his Honorable Discharge in 1945, he met and married his wife, Dorothy A (Sager) Lanternier.  After selling their farm in upstate NY, they moved to Daytona Beach where they raised their two daughters. Prior to owning and operating Dick Lanternier Painting & Contracting from 1958, continuing thru 2004, he owned and operated 2 ice cream trucks on the beach. He commercially fished with Frank Timmons, and worked the last races with Bill France, Sr. during the motorcycle and car races on the beach. Dick was involved with the South Daytona Lion's Club, Daytona Beach Jaycees, Daytona Beach Better Business Bureau, Rotary Club and a Charter member of the Halifax Sport Fishing Club and Daytona Striking Fish Tournament.  He was a lifetime member of VFW, Post 3282, a local and state president of the Painting Decorating Contractor's Assoc, and recognized nationally as a lifetime member.  During his years with the Jaycees, he was with the group of men who moved Embry-Riddle Aeronautical University in his work trucks & vans from Miami to Daytona. He also was a member of the HOG, BMW & Liars clubs. Retiring in 1986, he began working with the Motorcycle Safety Foundation as an instructor and taught for 7 yrs. Dick began riding as Uncle Sam after restoring a 1947 Harley Flathead. Over 20 years he lead many parades throughout the state and locally for every occasion promoting patriotism.  His volunteerism as Uncle Sam has caused him to be acknowledged as one of the most recognized individuals associated with motorcycle activities in the world. Fishing, motorcycles and his family were his lifelong passions. Richard was preceded in death by his parents, his brother, Louis Lanternier and his long-time wife Dorothy Sager Lanternier. He leaves his cherished memories to his daughters Lori Lanternier Sharlow and Bonnie Riconda Lanternier, son in law, Daniel Riconda his 6 grandchildren, Jason Sharlow, Gabriel Sharlow, Caitlyn S. Blasi, Eryn Riconda, Ethan Riconda & Destin Sharlow, 2 great grand children, Kylea Sharlow & Aeden Blasi and his 2 brothers, Ralph M. Lanternier, Huntington Beach, CA, & Donald D. Lanternier, Lockport, NY. A Memorial Service will be held 10:00 am, Saturday, April 4, 2015 at Salty Church, 221 Vining Ct., Ormond Beach, FL 32176.  Requested dress attire is casual and patriotic. Should you wish, in lieu of flowers, contributions may be made in his name to: Halifax Health Hospice of Volusia / Flagler, 3800 Woodbriar Trail, Port Orange, FL 32129, or the Alzheimer's Foundation of America, www.alzfdn.org. Arrangements are under the care of Heritage Funeral & Cremation Service, Port Orange, FL.

The family of Richard Sam” Lanternier created this Life Tributes page to make it easy to share your memories.

Send flowers to the Lanternier family.