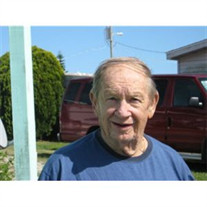 Richard Allen Karcher Richard Allen Karcher of Flagler Beach, FL. was born on February 6, 1931 in Baltimore, MD. to the late Harry E. Karcher and Bessie Karcher nee Sprinkler.  He passed away on April 30, 2013 in Palm Coast, FL. at the age of 82 years. Richard was a U.S. Army Veteran, serving during the Korean War.  He retired in 1986 after serving 32 years as a firefighter for the City of Baltimore, MD.  He relocated to Florida from Maryland in 1987.  He enjoyed going to Las Vegas and boating & fishing.  Richard loved playing softball and was co-founder of the Flagler Senior Softball League. In addition to his parents, Richard is preceded in death by his son, James Cannalito. He is survived by his loving wife Regina of 57 years, his son, Kevin Hollingsworth of FL., his daughter, Ann Lease and husband Branson of MD., and his daughter-in-law, Debra Cannalito.  He also leaves behind his grandchildren; Joseph, Jeffrey and wife Tammy, Colleen, and Amanda Lease, Jacob and Brandon Karcher, and Melissa Cannalito.  His great grandchildren; Winter Cannalito, and Ethan, Logan, and Owen Lease, his aunt, Eva Dalton of PA., and his uncle, Elmer Elgert and wife Blanche of MD.  Also surviving are numerous brother and sisters-in-law, nieces and nephews, and many friends. In lieu of flowers, donations may be made in Richard’s name to the St. Jude Holiday Card Program P.O. Box 1000, Dept. 142 Memphis, TN. 38148-0142. All arrangements are under the direction of Heritage Funeral & Cremation Service, Port Orange, FL.

The family of Richard Allen Karcher created this Life Tributes page to make it easy to share your memories.

Send flowers to the Karcher family.