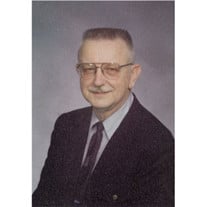 Richard Joseph Zalewski Richard Joseph Zalewski, of Port Orange, FL was born on September 30, 1935 in Warsaw, Poland to the late Mitchell and Stella Zalewski nee Zywislek. He passed away on January 8, 2013 at his residence at the age of 77 years. Richard served in the United States Army and was a Veteran of the Korean Conflict. He retired as a Lieutenant with the Daytona Beach Police Department in June of 1988 and was the Supreme Allied Commander for the city of Daytona Beach, FL. Richard was also the Owner of Angela’s Imprinting in South Daytona, FL for 15 years. He was a member of the Our Lady of Hope Catholic Church where he served as a Eucharistic Minister. Richard enjoyed riding his motorcycle, driving and traveling. He had a very strong Catholic faith and was a devoted family man. Richard is survived by his loving wife of 55 years, Angela Zalewski of Port Orange, FL, a son, Richard Zalewski, a daughter, Michelle Hurley, a brother, Jack Zalewski and wife Laura of Michigan. He also leaves behind four grandchildren; Travis, Josh, Amber, and Nicole, and one great grandchild, Sophia. Close family friend Jano Woodard. Richard is preceded in death by his son, Mark Zalewski. A Funeral Mass celebrating the life of Richard will be held at 11:00 am on Wednesday, January 16, 2013, with visitation from 10:00 am to 11:00 am at Our Lady of Hope Catholic Church, 4675 South Clyde Morris Blvd., Port Orange, FL 32129. Memorial donations may be made in memory of Richard to the Halifax Health Hospice of Volusia/Flagler, 1688 W. Granada Blvd., Ormond Beach, FL 32174. All services are under the direction of Heritage Funeral & Cremation Service, Port Orange, FL.

The family of Richard Joseph Zalewski created this Life Tributes page to make it easy to share your memories.

Send flowers to the Zalewski family.