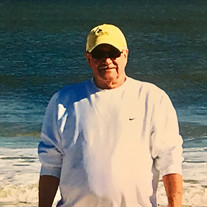 Richard E. Layng, 76, passed away on Friday, March 30, 2018, with his family by his side. Richard, known as “Dick” to his family and friends, was born and raised in Detroit, Michigan. He met the love of his life and wife of 54 years, Diane E. Layng, while attending Cooley High School. Upon graduation from high school, Dick entered the work force with Michigan Consolidated Gas Company. He worked there as a Chemist for many years until his retirement when he moved to Florida. Dick loved the outdoors. He enjoyed golfing, playing croquet, taking drives by the ocean, and swimming in his pool. Dick and Diane loved their home in Grand Haven, a community in Palm Coast, Florida. There they met many friends and found happiness after retirement. Bible study was of utmost importance to Dick. He had a strong faith. He had a relationship with God that surpassed all understanding. In his final moments, he knew that Diane was waiting to welcome him home. He was preceded in death by his wife, Diane, his mother, MaryJane Layng, and his father, Edward Layng. Richard was supported by a large family that loved him and will miss him very much. He is survived by his daughters Pamela Molyneaux and Stephanie Chatfield, sons-in-law John Molyneaux and Mike Chatfield, grandchildren Derek Molyneaux, Bennett Molyneaux, Ella Chatfield, Cohen Chatfield, Grady Chatfield, sister Carol Karvola, and brother-in-law Lee Karvola. A memorial service will take place at Parkview Baptist Church on Friday, April 6, at 3:00 PM. In lieu of flowers, Dick requested donations to benefit Parkview Baptist Church. Heritage Funeral and Cremation Service is in charge of the arrangements.

The family of Richard "Dick" Layng created this Life Tributes page to make it easy to share your memories.

Send flowers to the Layng family.