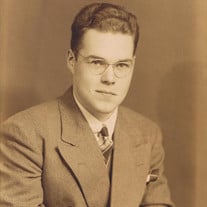 Richard D. Lowry, 93, passed away on July 11, 2016 at Princeton Village of Palm Coast Living Facility. Born September 3, 1922 in White Plains, New York he was the son of Daniel Joseph Lowry Jr. and Edna Viola DeVoe. Richard was a 1940 graduate of Port Chester(NY) High School. He was a World War II veteran serving as a Surgical Technician with the 352 Station Hospital, Suriname in the Caribbean Theater. On December 1, 1946 Richard married Winifred Ethel Thomsen in Port Chester, New York. They lived there until moving to Armonk, NY in 1951 where they raised their family, retiring to Ocala, FL in 1986. They were married for 63 years and together enjoyed traveling, and were accomplished square and round dancers. Richard is survived by daughters Linda Hay, Palm Coast, FL, Janet (Shawn) Barrett, Yarmouth, MA, a son Thomas (Linda) Lowry, Sherrill, NY, a brother Herbert (Page) Lowry, Winnabow, NC., six grandchildren and seven great-grandchildren. He was preceded in death by his wife Winifred, July 2009, and sisters Lorraine Genovese and Ruth Coviello. As per Richard's request, no services will be held. No flowers please. Donations in Richards memory can be made to the Stuart F Meyer Hospice House, 150 Memorial Medical Pkwy, Palm Coast, FL 32164. Heritage Funeral and Cremation Service is in charge of arrangements.

The family of Richard D. Lowry created this Life Tributes page to make it easy to share your memories.

Send flowers to the Lowry family.