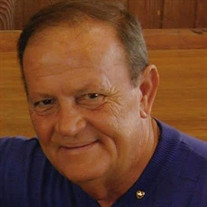 Richard C. Todd, age 77, of Palm Coast, Florida, formerly of Jacksonville, FL, Fort Myers, FL and West Pittston, PA passed away peacefully at his home in Palm Coast, FL on December 26, 2018. He was born June 27, 1941 in West Pittston, PA to Thomas C. Todd and Carolyn M. Ratchford. Richard graduated at the top of his class in 1959 from West Pittston High School. Richard attended Lafayette College and later left to take a retail position at Woolworth's. Through Richard’s hard work, determination and natural ability for sales, Richard moved up the company where he soon became a successful store manager. On August 4th, 1962, he married Marilou Gdovin, a nurse and high school sweetheart. They moved to Florida in 1971 where Richard continued to work in the retail industry until he established his own insurance practice. After retiring from the insurance business in 2002, Richard’s passion for working with people and sales, led him to the investment industry and later back to retail. He also pursued his love of music and proceeded to record numerous albums, which have been shared far and wide, known to many as “DCT.” Richard was a very driven person and ultimately, when he garnered success, his ambition was to share with everyone. He was a spiritual man who loved life, sports, and his family; he knew no stranger and anyone who crossed his path quickly fell in love with his friendly, compassionate, outgoing charm. He will be deeply missed by his friends and family, and all who knew him. Richard is predeceased by his wife, Marilou. He is survived by his children, Richard Todd Jr., Stephen Todd, Christopher (Joanne) Todd; twelve grandchildren, nine great-grandchildren; brother Robert Todd, sisters Sharon (Joseph) Orlando, and Phyllis Serafine; and his close friend of many years Penny Waters, her daughter Jordyn, granddaughter Gracyn, and many friends. Friends may call Sunday, December 30, 2018, 12-1PM at Ponte Vedra Valley Chapel, 4750 Palm Valley Road, Ponte Vedra Beach, FL., followed by a memorial service and interment. In lieu of flowers, expressions of sympathy in his memory can be made through a donation to the Tom Coughlin Jay Fund Foundation. Heritage Funeral and Cremation Service is assisting the family.

The family of Richard C. Todd created this Life Tributes page to make it easy to share your memories.

Send flowers to the Todd family.