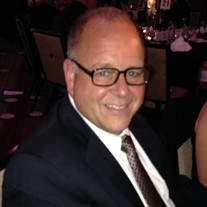 Richard J. Rawald, 66, passed away on October 3, 2019 in St. Augustine, Florida. Rick recently retired as President of Sysco Jacksonville after spending his entire career in the food service industry. He was known for his friendly nature and infectious laugh along with an ability to connect with any person no matter their background. After a courageous battle with depression his pain became overwhelming. He is survived by his wife of 19 years and the love of his life, Robin. Rick was also incredibly proud of his adult children, Doug (KalMarie) Rawald and Kim (John "J") Sheets (Rawald), and a proud Pop-Pop to Dane Sheets, Kendall Sheets and Lincoln Rawald. Rick was the oldest of four children. He is survived by his sister Regina (Tom) Kriz, brothers Ronald (Maureen) Rawald, Robert (Joanne) Rawald, nieces Allison Kriz, Christa (Derrick) Robles, Kerry Rawald, Megan (Drew) Green and their son Tristian, mother-in-law Faye (Ronnie) Evans, and sisters-in-law Vicki Wilson, Sheryl Wilson, Denise (Gary) Blanchard and their children Krystyna, Gary, and Andrew. He was preceded in death by his parents Paul and Tillie Rawald. Rick was a dedicated member of Good News Church and enjoyed activities such as golfing, sports and traveling. His passion was his family especially his wife Robin, his children and their three grandchildren. A celebration of life service will be held on Saturday, October 12th at 11:00am at Good News Church, World Golf Village Campus, 573 W. Twincourt Trail, St. Augustine, FL 32095. Following the service a reception will be held at The Parlor Room, 300 San Marco Avenue, St. Augustine, FL 32804. Donations can be made to the National Alliance on Mental Illness - St Johns Chapter at www.namivfsj.org. Flowers can be ordered from Flower Works - (904) 824-7806. Heritage Funeral and Cremation Service is in charge of arrangements.

Richard J. Rawald, 66, passed away on October 3, 2019 in St. Augustine, Florida. Rick recently retired as President of Sysco Jacksonville after spending his entire career in the food service industry. He was known for his friendly nature and... View Obituary & Service Information

The family of Rick J. Rawald created this Life Tributes page to make it easy to share your memories.

Send flowers to the Rawald family.