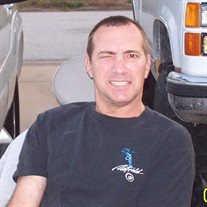 Robert (Robbie) W. Fuller, 53, of Ormond by the Sea, passed away Thursday, July 14, 2016, at Hospice Care Center in Ormond Beach after a long battle with Progressive Multiple Sclerosis. Robbie was born in Pittsfield, MA on November 6, 1962. He moved to Ormond by the Sea with his family in 1965. He graduated from Seabreeze Senior High School and attended Daytona Beach Community College. Robbie loved the beach and surfing was his life. He was a member of the North Shore Gang Surfing Club and one of the original members. He enjoyed sharing his knowledge and experience with other surfers, even when he was unable to get back on a board. Even after being diagnosed with MS, he continued to stay involved as much as possible. He was looked up to and admired by many people in the surfing community. He will be greatly missed by everyone he touched. He was preceded in death by his father William (Bill). He is survived by his mother, Cynthia (Cindy); sister, Sheryl Clodfelter (Sandy) of Orange City; brother Scott (Lisa) of Ormond Beach; two nephews, Michael Kraski (Alicia), Sean Clodfelter (Kim) of Ormond Beach, and four nieces: Crystal Fuller of Ormond Beach, Sarah Clodfelter (Jon) of Orange City, Rebecca Carter of California, and Brandy Carter of Ormond Beach, and Aunt and Uncle Peggy and Steve Steele of Palm Coast. Memorial Service will be on August 14, 2016 at 10:00 a.m. where the old Ormond Pier Stood. Please meet at Tom Renick Park, 1575 Ocean Shore Blvd, Ormond Beach, FL 32176. We will begin with the service on the shoreline followed by a paddle out to spread his ashes at sea. Anyone that is interested in the paddle out, please be at the park at 9:30 a.m. A get together will be held at the park immediately following the service and paddle out. In lieu of flowers, donations are being accepted by the Fuller family to contribute to Robbie’s final expenses. Donations can be made to Robbie’s gofundme account at https://www.gofundme.com/2cwutn3w

Robert (Robbie) W. Fuller, 53, of Ormond by the Sea, passed away Thursday, July 14, 2016, at Hospice Care Center in Ormond Beach after a long battle with Progressive Multiple Sclerosis. Robbie was born in Pittsfield, MA on November 6, 1962.... View Obituary & Service Information

The family of Robert W. Fuller created this Life Tributes page to make it easy to share your memories.

Send flowers to the Fuller family.