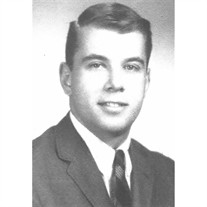 Robert George Speakman Robert George Speakman, age 70, of Ponce Inlet, FL passed away peacefully in the loving arms of his wife, Janet, on September 8, 2014 at Halifax Health Hospice of Volusia/Flagler, Port Orange, FL after a courageous battle with cancer.  Bob fought this deadly foe with the same determination he lived his entire life, and his deep faith enabled him to be strong to the end. Born on March 7, 1944 in Abington, Pennsylvania to William H. and Edith G. Speakman, Bob spent the first half of his life in the Philadelphia area before relocating to the Orlando area in 1986.  He graduated from Westtown School and Ursinus College and had a career in food sales and distribution.  Five years ago Bob achieved his longtime dream of living in his “little piece of paradise” at the beach.  Bob lived to “protect and serve”, and he did so until the end.  Bob’s quick wit, favorite sayings and ability to make others laugh will be missed by all who knew and loved him. He is survived by his wife Janet, daughter Amy of Port Orange, FL, daughter and son-in-law Beth and David Bortz of Richmond, VA, granddaughters Devon and Katelynn Bortz of Richmond, VA, and his beloved and faithful dog Mindy. The family is grateful for the loving, compassionate care Bob received at Halifax Center for Oncology and at Halifax Health Hospice of Volusia/Flagler. A memorial service celebrating Bob’s life will be held at a later date.  In lieu of flowers, donations may be made in Bob’s memory to Halifax Health Hospice of Volusia/Flagler, 3800 Woodbriar Trail, Port Orange, FL 32129 or Wounded Warrior Project.org/Donate Arrangements were under the care of Heritage Funeral & Cremation Service, Port Orange, FL.

The family of Robert George Speakman created this Life Tributes page to make it easy to share your memories.

Send flowers to the Speakman family.