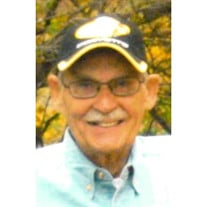 Robert J. McGuire Robert J. McGuire of St. Louis, MO was born on February 17, 1926 in Raymondville, MO to the late Robert & Mae McGuire nee Perryman and passed away on February 25, 2015 at 89 years in his vacation home in Port Orange, FL with his loving wife of 15 years, Sandra McGuire who had been by his side for over 40 years. Robert went to Licking High School in Licking, MO, and then attended college at St. Louis Business School.  He moved into the St. Louis area in 1946 after his military service.  He was a WWII veteran with many stories to tell.  Robert received a Purple Heart with a cluster and was a Disabled American Veteran. In addition to his parents, he is preceded in death by two brothers; Jasper McGuire and William McGuire, three sisters; Helen Shelby, Jewel England and Jean Lemmons. Robert is survived by his loving wife Sandra McGuire, a daughter Pamella Lyerla, two brothers; Tom McGuire and Charlie McGuire.  He also leaves behind three grandchildren; Jessica, Jacob and Joshua. Robert enjoyed many hobbies and interests: car racing, boating, fishing, having breakfast out with his sweetie and traveling with her as often as he was able.  He called her his Earth Angel up into his last hours.  He lived life on his terms and not necessarily what was expected by others. He loved his daughter, son in law, his grandchildren, all his sisters and brothers.  He especially loved hanging out with his two nephews and brother in law.  He had a mischievous sense of humor and was known for his loyalty, character and gentlemanly qualities.  He loved his dogs, the country and spending time outdoors.  Robert did not know many strangers; to him everyone was a potential friend.  He once said to his dear nephew, “Everyone had a story worth listening to.”  He will be greatly missed by his family and friends and remembered by many others for the wonderful difference he made in their lives. There will be a memorial service at a later date with military honors at graveside in Jefferson Barracks National Cemetery, St. Louis, MO.  Robert will be cremated with a portion of his ashes scattered in the places he loved most: including Daytona Beach, FL, Gatlinburg, TN,  Puerto Vallarta, Mexico,  St. Louis, MO, and perhaps Taos, NM. Arrangements under the care of Heritage Funeral & Cremation Service, Port Orange, FL.

The family of Robert J. McGuire created this Life Tributes page to make it easy to share your memories.

Send flowers to the McGuire family.