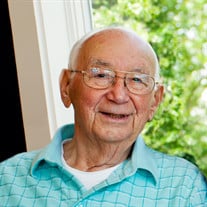 Robert (Bob) Francis Snover, 93 passed away peacefully Wednesday October 30, 2019 at Countryside Lakes in Port Orange, FL. He was born in Detroit Michigan to Gregory (George) Sznarwakowski and Monica Gorznska on March 12, 1926 and had an older brother George and 2 younger sisters, Mary and Phyllis. Bob is survived by his wife of 65 years Betty, three sons, Robert M, Steven, and Jeffrey, 9 grandchildren: Kristoffer, Nikole, Sean, Kendra, Ashley, Tyler, Dylan, Brandon and Kerri and 7 great grandchildren: Angel, Joanna, Atreyu, Lilly, Charlotte, Jarrod and Jacob. Bob was a loving husband, father, grandfather, great grandfather and friend to everyone and will be sorely missed by all. Bob grew up during the Depression, lost his father to illness in 1930 and started working at the age of 7, selling newspapers after school on the corners of Parker and Mt Elliot in Detroit, Michigan. At the start of 9th grade in 1940 he had to leave school to work full time at Tom’s Quality Market in Detroit to support his mother and two sisters. In 1942 when he was 16 years old, he started a full time work at Garwood Industries, building parts for PT boats and tanks and was promoted to a Quality Inspector after only 3 months. Bob served in the US Army and Air Force in both WW2 & Korean wars, where he received his High School & College GED’s and the National Defense Service Medal. On 6 February 1954, he married Betty Mae Tibstra in Evergreen Park, Illinois. After moving frequently around the country for electronic companies, he settled in Chelmsford, MA in 1966 to raise his family. He spent a majority of his career as a senior electronics engineer at RCA, working for the US Air Force Special Forces, Boeing, Grumman and NASA and then at Raytheon, working for the US military and the FAA. He was particularly proud to be part of the team of radar specialists responsible for landing the Lunar Excursion Module (LEM) and astronauts on the moon. Bob retired in 1992, and eventually moved to Port Orange FL. During his career Bob enjoyed family travel and camping vacations and during retirement he enjoyed travel to Hawaii, Mexico and California and fishing trips to NH and the Florida Keys with his sons. Always considerate of others, he took life’s ups and downs in stride, always finding something to smile about. People who’d known him for decades and those who’d only recently met him at Countryside Lakes all have such positive memories of what a kind and lovely soul he was. A true gentleman, thankful for a life well lived A Memorial service will be held at 2:00 PM, Thursday November 7 at Countryside Lakes, 941 Village Trail, Port Orange, FL, 32127. Bob will be interred at the NH State Veterans Cemetery in Boscawen, NH at a private family ceremony at a later date. In lieu of flowers, memorial donations may be sent to Cross Roads Ministries, 1851 S. Clyde Morris Blvd., Daytona Beach, FL 32119 www.crbible.com You may share a memory of offer sympathy online @ www.heritageflagler.com

Robert (Bob) Francis Snover, 93 passed away peacefully Wednesday October 30, 2019 at Countryside Lakes in Port Orange, FL. He was born in Detroit Michigan to Gregory (George) Sznarwakowski and Monica Gorznska on March 12, 1926 and had an older... View Obituary & Service Information

The family of Robert Francis Snover created this Life Tributes page to make it easy to share your memories.