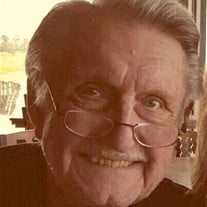 Roger went to meet our Lord on September 28, 2016. He was born in Milwaukee on May 29,1930. He graduated from Rufus King High School and attended Marquette University. Then when called he served as a 2nd Lieutenant in the US Army during the Korean Conflict. He went to work for Dittmar Realty first as an expediter, then serving many years as Vice-President for Residential and the Commercial construction. Roger was married to Sandra Davis Simrod in October 1973. An avid hunter, fisherman (who earned the title of Musky Rod), boater, snow skier and a sometimes golfer he loved the outdoors and spent as much time there as possible. Upon his retirement to Florida, with his love of the great outdoors he worked on two golf courses, Pelican Bay and River Bend so as to work, be active, and breathe fresh air and have the benefit of free rounds of golf. He also enjoyed working on the many flowers around his pool. He is survived by his wife, Sandy; four children:Gayle (Robert)Coleman, of Verona, WI; Gwen (Daniel) Armbrust of Milwaukee WI; Justin Grundmann of Seattle, WA; and Robert Grundmann of Ormond Beach; five grandchildren: Sara (Cliff) Brugman, Fox Point, WI; Jon (Elsie) Coleman Whitefish Bay, WI; Christopher Armbrust, Mequon, WI; Jessy and Jason Grundmann of Ormond Beach; and a three month old great-granddaughter Cecilia Brugman; brother, Glenn (Nancy) Grundmann, Kokomo, IN; and his one-time colleague and best friend for 81 years Clarence Dittmar of Palm Beach, FL and Menomonee Falls, WI; along with many other relatives and close friends. He was a member of Christ Presbyterian Church in Ormond. He was much loved for his kindness and will be greatly missed by all who knew and loved him. At his request a private memorial service for his immediate family will be held. Heritage Funeral and Cremation Service is in charge of arrangements.

Roger went to meet our Lord on September 28, 2016. He was born in Milwaukee on May 29,1930. He graduated from Rufus King High School and attended Marquette University. Then when called he served as a 2nd Lieutenant in the US Army during... View Obituary & Service Information

The family of Roger H. Grundmann created this Life Tributes page to make it easy to share your memories.

Send flowers to the Grundmann family.