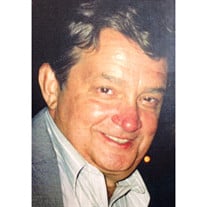 Ronald Allan Hertel, Sr. Ronald Allan Hertel, Sr. was born January 2, 1930 in New York City, NY to the late Edward Merton and Diana Hertel. He passed away at his Palm Coast, FL home surrounded by his family on October 31, 2013 at the age of 83 years. "Big Al" as he was known to his family and friends, was an avid music man and joke teller. He formed life-long friendships sustained with love, music, and laughter. He served in the US Army Air Corps during WWII with his best childhood friend Stanley Kaye, and together they owned and operated a successful full-service appliance & electronics business in Forest Hills, NY until his retirement. With Al's infectious personality, those in his life loved his jokes and sought his Renaissance Man talents. He taught his children how to swim and love the outdoors (amongst many other things) and his musical influence lives through them. He is survived by his beloved wife of 41 years, Hilda Hertel a retiree of Flagler County Schools, a son , Ron Hertel Jr. with wife Tiffany Hertel of Palm Coast, FL, two daughters; Jill Ann Hertel of Atlanta, GA, and Barbara Horowitz of Palm Beach, FL. He also leaves behind three siblings: Roger, Carol, and Richard Pyhtila. He was the grandfather of Riley, Dylan, and Cameron Hertel and Michael and Jonathan Horowitz. All arrangements are under the care of Heritage Funeral & Cremation Service, Flagler County, FL.

The family of Ronald Allan Hertel, created this Life Tributes page to make it easy to share your memories.

Send flowers to the Hertel, family.