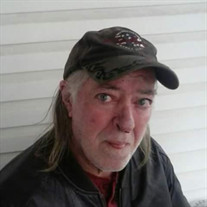 Roy Thomas [Tom] Fleming Jr [hillbilly] of Daytona Beach FL, age 77, passed away April 20, 2020 [4/20] after a short illness in hospice care. Born 1943 in Hickory NC he was the son of pre-deceased parents, Roy Thomas Fleming Sr and Retha Woodruff Fleming of Hickory NC. He went to Hickory High School In 1976 he married Karen Duncan and they had two sons, of Princeton, WV; he is survived by son Dagon Fleming and wife Sandy and 3 grandchildren, Anna, Robyn and Brea. Also, Cody Fleming and his granddaughter, Farrah Fleming and her mother Valerie. Also survived by mother of his children Karen Duncan of Princeton WV. In addition, Tom is also survived by brother Jerry Fleming and wife Linda, children Wayne, Wesley, Crystal, Josh, Kyla, Taya and Kimberly of Hickory NC, brother Donnie Fleming and son Donnie of Wills Point, Tx., sister Janet Alexander and son Shawn of Wilmington NC. Also nieces and nephews from the Duncan family that loved Tom, and many more great nieces and nephews on both sides of family. Tom was a retired electrician, owned Princeton Electric Co. Inc of Princeton, WV and employed many good people. He took great pride in his work and always tried to treat people fairly. He also had a passion for horses, we had 5 at one time. He loved to fish and recently went to Tx where his brother and family lived and they took him fishing at the pier, he talked about how much he really enjoyed it. He also loved to ride his Harley before he retired it also. His character and his height preceded him wherever he went, he made many friends. A special thanks to all his friends for caring and also to Lynn who helped him in his last days, thanks Lynn. Following Tom’s wishes, he will be cremated and there will be no services at this time. We will try to have a small memorial later in his memory and will let it be known if you would like to attend. Last words, Tommy you will be missed by your loved ones. Tom loved his family and cherished time with his sons and grandchildren. He loved keeping up with other family at a distance on social media, seeing their posts and family pictures, also posting his funny stuff and was a supporter of Trump, patriotic about his country and our veterans. Heritage Funeral and Cremation Service is assisting the family.

The family of Roy T Fleming Jr created this Life Tributes page to make it easy to share your memories.

Send flowers to the Fleming family.