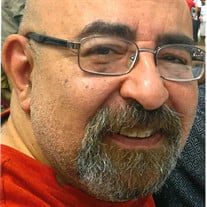 Dr. Shahrdad G. Sajjadi, 58, of Palm Coast passed away suddenly on January 6, 2020 in Palm Coast with his family by his side. He was born in Tehran, Iran on February 1, 1961 to the late Shamsoddin and Parirokh (Badi) Sajjadi. He graduated from Coventry University in England with a Bachelor of Science in 1984 and further accomplished his Doctorate in Philosophy in 1988. With his love and dedication for education, he achieved another Doctorate in Science at Cambridge University in 1992. Shar accrued several accolades throughout his impressive career. He was notably recognized as a Fellow of the Institute of Mathematics and its Applications in 1991 and a Fellow of the Royal Meteorological Society in 2018. In addition, one of his most proud moments was when he was presented with a Royal Charter in Mathematics by HRH Queen Elizabeth II in 1997. Another great achievement was when he was honored as the International Scientist of the Year by the University of Cambridge in 2004. Likewise, Shar was selected for inclusion in the 57th edition of Who’s Who in America as well as multiple editions of Who’s Who in Science and Engineering and Who’s Who in the World. With over 35 years in the education and research arena, Shar has served in a number of capacities at Embry-Riddle Aeronautical University in Daytona Beach including as the Chairman of the Mathematics department, Professor of Mathematics, Director of Research, and Professor of Theoretical Fluid Mechanics since 2005. Shar was mentored by Lord Julian Hunt, the Baron of Chesterton, and Michael Longuet-Higgins, who influenced him toward his chosen fields of Air-Sea Interactions, Turbulence, and Wind-Over-Waves. He found great satisfaction in his research as well as the opportunity to pass on his knowledge to the next generation of scientific professionals. Among the myriad of professional highlights throughout his career, he published over 200 journal articles and several books. He enjoyed collaborating with various colleagues from around the world. Shar’s favorite quote from Beethoven: “I have never thought of writing for reputation and honor. What I have in my heart must come out, that is the reason why I compose.” Shar was a fierce mathetician, avid music lover, a very talented composer, and enthusiastic film collector. In addition, he loved animals – all creatures great and small. All those that knew Shar appreciated his unique sense of humor, intellectual conversations, and his restless deep big caring heart. Shar’s Family and friends include his loving wife of 18 years, LuAnn of Palm Coast, FL; Brother Shahram, wife Kata, and their children Lily and Kian; Brother Mehrdad (Bobby), wife Guity, and children Leila and Maryam; Parent-In-laws: Dorothy and Don Bressette; Brother-In-Law: Michael Hilton; Along with multiple Aunts and Cousins; Best friend for over forty plus years: John Aldridge; and his beloved dog Clyde and cat family. A viewing will be held on Friday, January 10, 2020 at Heritage Funeral and Cremation Service, 4601 E. Moody Boulevard, Bunnell from 6:30 pm until 8:30 pm with an informal service at 7:15 pm. Condolences may be left online at www.heritageflagler.com.

Dr. Shahrdad G. Sajjadi, 58, of Palm Coast passed away suddenly on January 6, 2020 in Palm Coast with his family by his side. He was born in Tehran, Iran on February 1, 1961 to the late Shamsoddin and Parirokh (Badi) Sajjadi. He graduated... View Obituary & Service Information

The family of Dr. Shahrdad G. Sajjadi created this Life Tributes page to make it easy to share your memories.

Send flowers to the Sajjadi family.