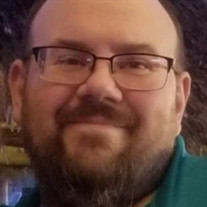 Shawn E. Detwiler, 45, formerly of Elkhart, Indiana, passed away peacefully with his loving wife, son and daughter by his side on September 15, 2021 in Palm Coast, Florida. Shawn was born in 1975 to his, Mother, Leisa and Dennis Detwiler (deceased) in Elkhart, Indiana. He was lovingly raised by Lisa and his, Dad, Keith Smith. Shawn was passionate about playing football in high school and at Adrian College. His love for Star Wars started as a child and only grew as an adult. His childlike wonder for all things Disney, comic books, Sci-Fi, toys (oops… action figures ) and metal music brought a smile to all who knew and loved him. He especially had a passion for all things Lego. He became a master at assembling his building sets and proudly displayed them in their home. You could see him coming a mile away with his loud shirts and bright colored shoes. He met his beautiful wife in 2007 and they were married on October 31, 2009. They had a fondness for travel and going to the beach which caused them to follow their dream and move to Florida to be closer to the ocean, where Shawn found innermost peace. His family was the most important people to him. He adored his soulmate, Kimmers, and was immensely proud of his amazing children, Bryson and Kylee. He worked every day to show them how much he loved them and bring them joy. He was and, still is, their fierce protector. Shawn encouraged smiles and uniqueness in everyone. Life was meant to be enjoyed and filled with adventures. He was preceded in death by his father, Dennis Detwiler, and his grandparents. Shawn is survived by his wife Kimberly (Brayton), son Bryson (Abi) and daughter Kylee. Parents Leisa and Keith Smith, brother Jason Fulford (Billie) and sister Leanne Stahl (Laura) along with many aunts, cousins, nieces, nephews and many loving friends who were like family to him. There will be a Celebration of Life gathering later this year in Indiana. Memorial contributions may be made via https://Gofundme/05876926 Heritage Funeral and Cremation Service is assisting the family.

Shawn E. Detwiler, 45, formerly of Elkhart, Indiana, passed away peacefully with his loving wife, son and daughter by his side on September 15, 2021 in Palm Coast, Florida. Shawn was born in 1975 to his, Mother, Leisa and Dennis Detwiler (deceased)... View Obituary & Service Information

The family of Shawn E Detwiler created this Life Tributes page to make it easy to share your memories.

Send flowers to the Detwiler family.