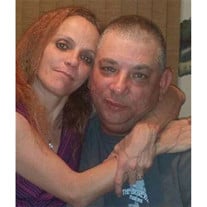 Shawni Hayes Fanizzi Shawni Hayes Fanizzi of Port Orange, FL was born November 21, 1970 in Akron, OH and went home to be with the Lord September 17, 2015 at the age of 44 years in Port Orange, FL after a short illness. Shawni was a graduate of McKinley High School, Canton, OH and played professional volleyball 5 years. She loved the ocean, beach and the outdoors. Shawni was a very loving wife, mother, and homemaker. She is proceeded in death by grandparents, Carson & Virginia Hayes of Akron, OH. Shawni is survived by the love of her life and husband, Frank Fanizzi, of Port Orange, FL, mother, Carol Blankenship and husband Kenny, son, Alex Fanizzi, and granddaughter, Aliyah Fanizzi, and grandson Bud, of Port Orange, FL, daughter, Amanda Kamer, sons; Robert Hayes, William Congrove, Kyle Congrove,, sister, Sarah Francis, brother, Donald Blankenship, and her aunt, Cindy Hayes. She also leaves behind 10 other grandchildren, many aunts and uncles, and friends of Akron, OH. She is loved by many and missed by all. She is truly a beautiful Angel. A Celebration of Life will be held on the beach at Wilbur By the Sea at 9:00 am, Sunday, September 20, 2015. In lieu of flowers the family requests donations in Shawni’s name to the Heart, Lung and Blood Association Research for COPD. Arrangements are under the care of Heritage Funeral & Cremation Service.

The family of Shawni Hayes Fanizzi created this Life Tributes page to make it easy to share your memories.

Send flowers to the Fanizzi family.