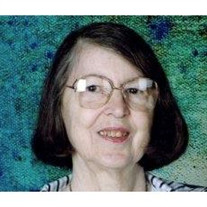 Sherrill Langdale: Remembering a Lady Sherrill Langdale had all the qualities one thinks about as belonging to a “lady”: elegant, gentle, kind, polite, dainty manners, quiet and unassuming, thoughtful, and careful not to hurt others feelings. She was the kind of person other people loved to be around. In spite of frequent health problems over her lifetime, she exhibited a remarkable inner strength. Her pleasures were quiet ones: Sherrill was an avid reader, enjoyed puzzles, antiquing, sewing and crafts, gardening, bird watching, and travel.  There was always a dog in the family. Sherrill was born on Christmas Eve in 1940 to Marie Frantz nee Bullock and Karl Frantz in Sioux Falls, South Dakota.  She and her younger brother Mike were “army brats,” and lived in many states, as well as Okinawa and Tokyo, as children.   She met her husband, Tom, at Aiken high school in South Carolina;  they married in 1957.  They had two children, Deborah and Tom “Chip”. A truly devoted mother and wife, Sherrill raised her children pretty much single handedly, as her husband traveled extensively for work. She was a stay-at-home mom in the beginning while living in Maine and Georgia. Once the kids were older, Sherrill went to work outside of the home in retail.  One of her most interesting jobs was at the House of Pretty Things in Old Saybrook, Connecticut, where she sold antiques. Her love and knowledge of antiques grew in this business, and she became a collector herself, a hobby she enjoyed for the rest of her life. After living in Connecticut for twenty years, Sherrill moved with her husband to Ormond Beach, Florida 1990. There she managed a non-profit thrift shop. In 1993, she was diagnosed with pancreatic cancer.  She endured three surgeries, chemo and radiation treatment, and miraculously survived. Having beat this typically unbeatable cancer, Sherrill felt that she had been spared for a reason, and decided to enter the health field as a home health aide. Her first position with Home Instead Senior Care was in California.  Her sweet smile, soothing presence, and intelligence made her a natural for this work. While acknowledging the difficulty of her work, she seemed to feel like she was where she belonged. Sherrill continued to work for Home Instead when she and her husband moved back to Florida in 2001.  In spite of her fragile health, she worked full time until her 70th year, when she was diagnosed again with pancreatic cancer.  This time the cancer was inoperable, and she was placed under Hospice care. Sherrill was gracious until the very end. She did not become angry or bitter, in spite of her sadness, and never lost her gentle sense of humor. She died at the age of 71, on June 20, 2012, at the Hospice Care Center in Orange City, FL. She will be sorely missed by all who were fortunate enough to know her.  Sherrill is survived by her husband Tom of 54 years of Deltona, FL, her brother Mike Frantz and wife Irene of Lebanon, NJ, her daughter Deborah Langdale of Deltona, FL, her son Tom Langdale and wife Tina of Sandown, NH, and her grandson Thomas Langdale of Evrett, MA. A memorial service were held on Saturday, July 14, 2012 at 11:00 am from the Heritage Cremation Memorial Chapel,  620 Dunlawton Avenue in Port Orange, FL.  Family received guests from 10:00 am until 11:00 am. In lieu of flowers, the family asks that donations be made to Halifax Health - Hospice of Volusia/Flagler or the Pancreatic Cancer Action Network in honor of Sherrill. All services are under the direction of Heritage Cremation and Memorial Chapel, Port Orange, FL.

Sherrill Langdale: Remembering a Lady Sherrill Langdale had all the qualities one thinks about as belonging to a &#8220;lady&#8221;: elegant, gentle, kind, polite, dainty manners, quiet and unassuming, thoughtful, and careful not to hurt others... View Obituary & Service Information

The family of Sherrill Langdale created this Life Tributes page to make it easy to share your memories.

Send flowers to the Langdale family.