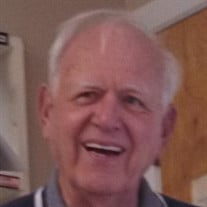 Sinclair W. Stickle, 83, of Palm Coast Florida, went to his eternal home on November 9, 2017. Greeting him on his arrival were his daughters, Anne Marie Stephen, Michele Lasky and Rebecca Lois Gynizio along with grandsons, Michael and Gregory Stephen. Sinclair was born on September 6, 1934, to Lois W. and Morton D. Stickle, Sr. of Newton, New Jersey where he was raised and in 1946 confirmed into the church family of the First Presbyterian Church of Newton. He attended public school and graduated from Newton High School in 1952. After graduation, he entered the US Army and served in the 3rd Infantry Division, 7th Regiment, Korea from 1952 to the end of the war in 1953. There he earned the Korean Service Medal, Presidential Unit Citation medal and two bronze service stars for his participation in the Battle of the Boomerang and Kumsong. Upon returning home he attended Ursinus College in Pennsylvania. Sinclair was an avid reader and learning was a passion. He was taking college courses up to his death. Sinclair and his wife of 55 years, Karen Marburger, of Pennsylvania were blessed with their son, Scot and daughter Rebecca. Sinclair enjoyed jumping out and piloting private aircraft. His skydiving days ended with a splashdown in the Valley Forge Country Club swimming pool. He spent many weekends taking friends and family on hops from one airport to another. On land he enjoyed history almost as much as mathematics and spent his last years writing and publishing a book based on his experiences in Korea. Sinclair’s entire professional career was devoted to the energy and heating and air conditioning industry. Shortly after returning to New Jersey he began work in the engineering department at American Standard where he designed and tested boilers and cooling systems. He continued this tract at Singer Air Conditioning (now Daikin) then it was on to ITT Nesbitt’s AC division in Philadelphia. When the energy crisis hit, Sinclair moved to Solar Industries of NJ and played a key role in developing an advanced solar hot water heating panel that, after 43 years, is the predominant design which can still be found on many homes today. In 1991, Karen and Sinclair resettled in Flagler County, Florida, where he retired and spent his newly found spare time running an established air conditioning service company which he and Karen purchased. Sinclair was active in the Palm Coast Rotary until his death. He is a former officer of Habitat for Humanity in both New Jersey and Florida. Sinclair, a deacon and elder for the Presbyterian Church, USA and life long choir member was an active part of the church community. He co-founded the Mustard Seed which continues to serve single mothers in need of housing in the Mt. Holly, New Jersey area. But first and foremost he considered himself a “child of God” and loved serving the Lord through mission and obedience in daily life. Sinclair is survived by his wife Karen; sons Mark (Leslie), Jeff, and Scot (Julia); sister Leaf Brockhausen; brother M. Donaldson “Don” Stickle (Betty); grandchildren: Matthew Mogel, Jason Stephen, David Stephen, Kenny Mogel, DeChantel Smith, Amanda DiMarco, Michael DiMarco, Jonathan Moyer, Brian Stickle, Daniel Stickle, Riley Stickle, Brittany Gynizio, and Branden Gynizio; numerous great-grandchildren and other relatives. A Celebration of Life will be held at 11:00 a.m. on Saturday, December 2, 2017, at Trinity Presbyterian Church, 156 Florida Park Drive, Palm Coast. Officiating will be the Reverend Sheryl Sumlin-Walker of Trinity Presbyterian Church and the Reverend Wayne R. Marburger (brother of Mrs. Stickle) of Prince George Christian Church, Prince George, Virginia. Our family wishes to extend our sincere thanks to men and women of Flagler Hospital for their devotion to the medical profession and to their patients. In lieu of flowers memorials may be given to Halifax Health - Hospice Fund Development, 3800 Woodbriar Trail, Port Orange, FL 32129, or by visiting their website at https://www.halifaxhealth.org. Interment will be at Arlington National Cemetery at a date to be determined.

Sinclair W. Stickle, 83, of Palm Coast Florida, went to his eternal home on November 9, 2017. Greeting him on his arrival were his daughters, Anne Marie Stephen, Michele Lasky and Rebecca Lois Gynizio along with grandsons, Michael and Gregory... View Obituary & Service Information

The family of Sinclair W. Stickle created this Life Tributes page to make it easy to share your memories.

Send flowers to the Stickle family.