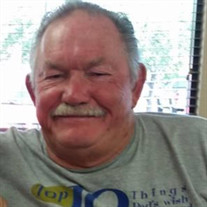 Steve Dwight York, of Pampa, Texas passed away on February 12th, 2021 at the young age of 71. He enjoyed being around his family and riding his Harley. A compassionate and loving husband, father, and friend that was always willing to share his knowledge and leave some wisdom with whomever he met. He graduated in 1969 from Ross S. Sterling High School in Baytown, Texas. Immediately out of high school, he voluntarily enlisted into the Army, where he completed two tours in Vietnam as a Crew Chief. While bravely serving his country, his valor led to the following honors: Overseas Bar (3), Aircraft Crewman Badge, Air Medal 1st - 12th Oakleaf Cluster, Vietnam Service Medal, as well as the Vietnam Campaign Medal with 60 devices. He ultimately earned his Instructor Certification and was considered a service matter expert on the H-53. After his service, he continued his education and completed his Associates Degree in Diesel Mechanics. When he wasn't instructing at Lee College as a professor, he was managing his automotive shop that he and his wife Susie owned. Steve and Susie moved to Pampa, Texas, to become care providers for not only his own mother, but also his mother in-law. Staying true to his roots, he involved himself in the community by becoming a life time member and Post commander of VFW Post 1657. He was also a shop foreman for one of the largest trucking companies in North Texas, while still finding the time to run a small ranch for the pleasure of his grandkids. His children and grandchildren eventually led him to sunny Florida, where he happily enjoyed his family and friends during retirement. Steve is survived by his lovely wife Susie C. York, three children, Rusty L. York, Steve D. York Jr., daughter in-law ,Gina York, Misty D. Gary, son in-law, Darryl D. Gary, and his grandchildren, Rusty York Jr., CiAra York, Luke York, Tori York, Steve York III (Trey), Steve York IV (Dwight), Justin Gary, along with seven great-grandchildren. His siblings, sisters, Vira and Vicky, and brother, Phillip. Steve was preceded in death by his mother, Margret Taylor. Arrangements entrusted to Heritage Funeral and Cremation Service.

Steve Dwight York, of Pampa, Texas passed away on February 12th, 2021 at the young age of 71. He enjoyed being around his family and riding his Harley. A compassionate and loving husband, father, and friend that was always willing to share... View Obituary & Service Information

The family of Steve Dwight York created this Life Tributes page to make it easy to share your memories.

Send flowers to the York family.