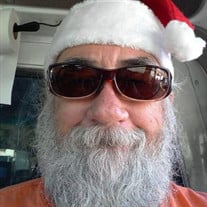 Steven Wayne Wood, 70, of Flagler Beach Florida, passed away on Sunday, December 12, 2021, after an 11-month battle with cancer at the Halifax Health-Hospice Care Center in Ormond Beach with loving family by his side. Steven was born in Albia, IA on March 1, 1951, to parents Phillip and Dortha Wood. He grew up in Burlington, IA the second of four children. He was a graduate of Burlington Community High School, Class of 1969. Steven married the love of his life, Diane (Lucas) on March 3, 1973, at Peace Lutheran Church in Prairie Grove, IA. On March 23, 1974 they welcomed their son Shane Steven into the world. Starting in 1976 Steven worked as a member Boilermakers Local 83 out of Kansas City, MO. working all over the Midwest until his family moved to Florida in 1988. After moving, he found a position as a welder at The Wittemann Company in Palm Coast until he and his wife went to truck driving school to achieve their CDL and became Over-The-Road truck drivers as Team Owner/Operators in 1998. After coming off the road, Steven became a truck driver for the City of Flagler Beach where he finished out his employment years until retiring on February 26, 2016. Steven was also a member of the Flagler Beach Volunteer Fire Department from July 1993 – February 2013. He served as the Captain of the Fire Police division of the department. He is survived by his loving wife of 48 years Diane (Lucas) Wood of Flagler Beach, his son Shane (Rebecca) Wood of Palm Coast, FL, brother Craig (Candy) Wood of Cedar Rapids, IA, Paula (Dennis) Mehaffy of Burlington, IA, Peggy Wilkinson (Mike Barkhaus) of Fort Dodge, IA, brother-in-law Rick (Debbie) Lucas of League City, TX, his five grandkids: Sydney Wood of Palm Coast, Gabriel (Stephanie) Garcia of Palm Coast, Frankie Garcia, Ft. Benning, GA, and Sabrina Garcia of Palm Coast, and three great-granddaughters Ella, Kylie and Maya as well as many cousins, nieces and nephews all who will miss him dearly. He was preceded in death by his grandparents Paul & Faye Sweeden, Jack & Emma Pfau, his parents Phillip & Dortha Wood, Lloyd & Loisanne Lucas, brother-in-law Brad Lucas and numerous aunts, uncles, and cousins. In lieu of flowers or gifts, the family requests that contributions can be made in Steven’s honor to the Halifax Health Hospice Service at: https://halifaxhealth.org/services-treatments/our-services/continuingcare/hospice-2/giving/donation-portal Heritage Funeral & Cremation Services is in charge of arrangements. A Celebration of Life will be held at a later date as well as interment at Aspen Grove Cemetery in Burlington.

Steven Wayne Wood, 70, of Flagler Beach Florida, passed away on Sunday, December 12, 2021, after an 11-month battle with cancer at the Halifax Health-Hospice Care Center in Ormond Beach with loving family by his side. Steven was born in Albia,... View Obituary & Service Information

The family of Steven Wayne Wood created this Life Tributes page to make it easy to share your memories.

Send flowers to the Wood family.