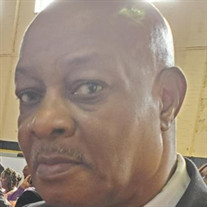 Stevie Owen Anderson August 14, 1950 – August 12, 2021. Stevie Owen Anderson transitioned his life on Monday April 12, 2021 at Advent Hospice in Palm Coast Florida. Stevie was educated in the Public School of Attuck High School in Hollywood Florida. He attended Washington Bible College in Lanham Maryland. Stevie was many things, a Husband, Father, Brother, Uncle, Cousin, Schoolmate, Friend, but more than all these things combined, he was a Christian. Stevie knew and understood the Word. Stevie knew that the only way into Heaven was to accept Jesus Christ as his Personal Savior. He was a Christian with an extraordinary relationship with God. He confessed his life to Christ and knew that someday Heaven would be his Home. He was employed with the Broward County Transit (BCT) as a Bus Driver; Manager for McDonalds Detroit, MI; Foreman with J & A Concrete & Construction, and Driver for Super Shuttle at Baltimore / Washington Airport (BWI). Stevie loved to fish and play poker. He love taking the kids to the amusement parks and get on rides with them, long walks on the beach and trying to teach them to swim, taking them out to varies of restaurant allowing them to try new food and talk as long as they wanted to, he answer all of their questions. He had a way of doing things his way and not always following the rules as we though it should be. Stevie was preceded in Eternal rest by his Father R.T Anderson and his Mother Mamie McPherson; grandparents, Daze Z and Georgia Lee Davis; one brother, Burnon Anderson; two Sisters, Kathy Williams and Shirley Austin; one Brother-in-Law Arthur Davis and our dog Brandi Anderson. His memories will forever be in the hearts and minds of his Wife Jackie Anderson of Palm Coast FL. Children;(Son) David Anderson and (Daughter) Felica Anderson Detroit MI; two sisters, Alice Anderson Palm Coast FL, Dale Davis Dania; one brother Craig McPherson (Venita) Riviera Beach FL. Brothers-in-law; Preston Austin Ocala FL. Lafayette Williams Toledo Ohio, Curtis Patterson Jr. Lakeland, FL. Leon Chappell and Tyrone Patterson Palm Coast FL. Sisters-in-law; Janice Chappell Jacksonville, FL. Diane Patterson Atlanta GA. Deloris Smith( Kelvin Smith) Palm Coast FL. and a host of aunts, uncles, nieces, nephews, cousins, friends and church family. Very special Nieces and Nephew who he has mentored since birth, Maurice Patterson Sr, Jazell Singleton, Darryell Singleton, Kavon Stokes (KJ), Maurice Patterson Jr (MJ) and Malin Jones whom they shared custody. These kids were his Pride and Joy... The Family will celebrate Stevie’s Life on his birthday on August 14, 2021 at the Palm Coast Community Center.

The family of Stevie O Anderson created this Life Tributes page to make it easy to share your memories.