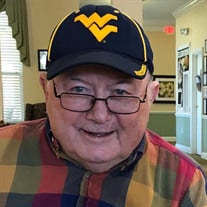 West Virginia lost one of its native and most devoted sons in the passing of Thomas R Poole, MD, on July 27, 2021 at the age of 89. Tom was born in a tiny cottage in the backwoods of Lico, WV, and spent most of his childhood and early adult years in Glasgow, WV. He roamed the hills camping and hunting, delivering newspapers to Glasgow and Cedar Grove, building rafts, and swimming and fishing in the great Kanawha River. As a young child, Tom knew he wanted to become a doctor. He made this dream a reality by attending Marshall University, West Virginia University, and receiving his medical degree at the Medical College of Virginia in 1960. He also served two years in the army during this time. While at Marshall, Tom was smitten with the sweet personality, natural beauty, and athleticism of Kay, who became his bride in 1954. Tom and Kay had two children, Virginia (Ginny) and Dan. Tom started a solo practice of obstetrics and gynecology in Charleston, WV in 1965. After many years and countless late night deliveries, he was joined in that practice by Drs. Constantino Arceo and Thomas Pearcy. When not delivering babies in the Kanawha Valley, he and Kay spent time running on the streets and mountains of Charleston and beyond. He was a member of the Charleston Distance Run committee for quite a few years and, along with eight others, enjoyed the fact that he ran all of the first 20 years of the Charleston Distance Run (15 miler). His friends Worley Stout, Jim Jones, and Bob Fleming were often by his side as well. Tom and Kay ran many local and state races as well as marathons (including several Bostons) across the nation. When he needed a break from the demands of work, there was no place he’d rather be than deer and turkey hunting in Mansfield, Pennsylvania, with his buddies Rev Bob McNeill, Jim Dodson, Dub Ferrell, and Tom’s brother, Steve. He spent many hours walking in the forests and always loved being out in “God’s country.” After his retirement, Tom and Kay moved to Palm Coast, FL, where they could enjoy outdoor activities on a year-round basis. They began bicycling in Charleston, and eventually biked across the United States in 1996, biked up and down the east and west coasts of the US, completed many century (100 mile) rides, biked the Blue Ridge mountains, Natchez Trace Parkway, and also completed the “assault on Mt Mitchell” (the highest mountain east of the Mississippi). They both continued biking well into their 70’s. Tom had the mind of a scientist, but the heart of an artist. While in Charleston, he completed many woodworking projects, including pieces of heirloom furniture. In his retirement years in Florida, he became a prolific and talented painter. Photography and photo editing were also a major outlet of his creative expression. Tom attended several photography workshops across the country (including Montana and Yellowstone National Park) and spent many hours on the computer creating gifts, books compiled of his own images, and mementos for friends and family. For a number of years his photos graced the pages of the Palm Coast, FL website. Tom loved to tell tales, especially humorous ones, and often laughed heartily as he was recounting a story or reciting a joke. He loved to banter, joke, and tease. He loved all things West Virginia and was often seen wearing a WV ball cap, tee shirt, and jacket. He was a huge fan of WVU Mountaineer and Marshall University sports. And John Denver's song, "Country Roads," never failed to bring tears to his eyes and a smile to his face. He was preceded in death by his parents, Tom and Eva Poole, and sister, Kathryn (Kay) Mann. He leaves to deeply cherish his memory his wife of 66 years, Kay, of Palm Coast; daughter, Ginny Brinthaupt (Tom) of Murfreesboro, TN; son, Dan (Dianne) Poole of Bunker Hill, WV; sisters, Betty Howe of Des Plaines, IL and Evelyn Robertson of Heber City, UT; brother, Steve (Barbara) of Tallahassee, FL; two grandchildren, Rob Brinthaupt and Lia Poole; special friend, William (“Dr Joe”) Moore; many nieces and nephews, former colleagues, and many friends. We give heartfelt thanks and feel deep gratitude to his amazing physical therapist, Paula Forgas, and likewise to nurses, Ken Fonte and Nick Todd of Brookdale Assisted Living. They cared for Tom with great love, compassion, and respect, and shared many moments of laughter with him during some challenging times in his last years. A special thank you also goes to Edwin Clark, of Bunnell, FL, a fellow West Virginian, who spent many afternoons visiting Tom, often with WV memorabilia and clothing items in tow. At his request, there will be no funeral or memorial service. In lieu of flowers, Tom would love for you to get out and enjoy the great outdoors; take a hike in the woods; visit some of the beautiful natural resources, parks, and landmarks in the great state of West Virginia; take time to develop your talents and gifts; enjoy hearty laughter with those who bring love to your soul; try not to take life too seriously; and, cherish this gift of life. And yes, our beloved Tom, we will take you home, down country roads.

West Virginia lost one of its native and most devoted sons in the passing of Thomas R Poole, MD, on July 27, 2021 at the age of 89. Tom was born in a tiny cottage in the backwoods of Lico, WV, and spent most of his childhood and early adult... View Obituary & Service Information

The family of Thomas Robert Poole created this Life Tributes page to make it easy to share your memories.

West Virginia lost one of its native and most devoted sons in...

Send flowers to the Poole family.