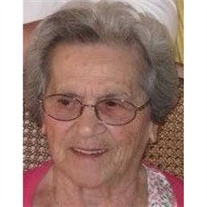 Victoria Cianfarano Brett Victoria Cianfarano Brett, 90, of Holly Hill, passed away on March 15, 2014, peacefully at home with her family at her bedside. She was born in Fulton, New York, on March 30, 1923. Vicky worked at Nestles in Fulton, General Electric in Syracuse, and was a beautician for many years, but most of all he was a loving and devoted wife, mother and grandmother. Vicky was preceded in death by her parents, who immigrated from Italy in the early 1900’s, her loving husband of 65 years, Fred C. Brett, and eleven brothers and sisters. She is survived by her three children, Claudia Strom (Michael), Palm Coast, Fl, Jeri Fisher (Bill), Palm Coast, Fl, and Fred Brett (Debi) Lawrenceville, Ga, eight grandchildren and eight great-grandchildren. A memorial celebration of her life will be held at a later date. Arrangements are under the care of Heritage Funeral and Cremation Service, Port Orange, FL.

The family of Victoria Cianfarano Brett created this Life Tributes page to make it easy to share your memories.

Send flowers to the Brett family.