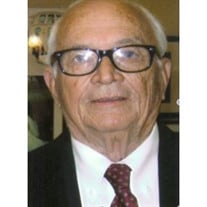 Wade Thomas Weeks Sr. Wade Thomas Weeks Sr. of Ponce Inlet, FL. was born August 4, 1931 in Sampson County, NC to the late Henry Weeks and Annie Mae Weeks nee Rackley. He went to be with Jesus on October 27, 2014 under the care of Florida Hospital Memorial Hospice Care, Daytona Beach, FL at the age of 83 years. Wade’s family moved to Richmond, VA in 1933. He graduated from John Marshall H.S. and went on to serve in the U.S. Marine Corps during the Korean Conflict, 1951-1953. He played competitive sports in High School and through out his life followed major sporting events with basketball being a favorite. He was a Chemical Engineer (MFG) for Honeywell Corporation, formerly Allied Chemicals, in Hopewell, VA. for 29 years. He retired in 1982, moved to Ponce Inlet, FL in 1990 to share time with son and grandson. Left to cherish his memory are his wife of 60 years Geraldine “Gerry” Weeks, son Wade Thomas “Tom” Weeks, grandson Wade Henry Weeks and wife Courtney Weeks of Charleston, SC, sister Catherine Wright of Lakeland, FL, brothers; Layton Weeks and Everette Weeks and wife Mary Anne, sister-in-law Joan Weeks of Richmond, VA. Wade loved his family; his son and grandson were his passion. His many nieces and nephews and their families and many friends felt his love in a very quiet gentle way. In addition to his parents, he is preceded in death by sister, Patricia and a brother, Paul Weeks. A celebration of Wade’s life will be held at 11:00 am, Saturday, November 22, 2014 from the First United Methodist Church of Port Orange, 305 Dunlawton Ave., Port Orange, FL, 32127. Visitation will be held from 10:30 am until the time of service. In lieu of flowers the family asks that memorials be directed to First United Methodist Church of Port Orange Homeless Program, Pastor’s Discretionary Fund for local needy, or Halifax Health Hospice of Volusia / Flagler. Arrangements are under the care of Heritage Funeral & Cremation Service, Port Orange, FL.

The family of Wade Thomas Weeks created this Life Tributes page to make it easy to share your memories.

Send flowers to the Weeks family.