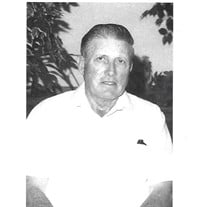 William Howard Allen, Jr., 87, of Bunnell, FL passed away peacefully at home on September 18, 2019. He was born in Dodge County, Georgia on May 21, 1932 to Bill and Beatrice Allen. Howard was a devout Christian and an ordained deacon who loved his Lord, Jesus Christ. He worked numerous jobs throughout his life and retired in 1998 from Flagler County Road and Bridge. He was hardworking, respected by all who knew him, and he loved his family and friends. He enjoyed hunting when he was younger and later in life had a great love for fishing. Howard was a United States Navy veteran who served from 1952 to 1956. Howard is survived by his loving wife of 64 years, Lillian; two daughters, Karen Robinson (Mike) and Tina Dean; two sons, Timothy Allen (Joy) and Walton Allen (Shari); and his younger brother, Don Allen (Pat). He was "Pepa" to 12 grandchildren: Diane Stade (Dan), Michael Robinson, Jr. (Tasha),Chris Dean (Olivia), JoLyn Robinson, Angela Weekley (Marshall), David Robinson (Ashley), Anita Lewis (Kevin), Crimsynn Cornett (Calvin), Robin Sanchez (Ryan), Kyle Allen (Whitney), Will Allen, and Anslie Allen. He also had 24 great-grandchildren as well as many nieces and nephews. Howard is predeceased by his parents, Bill and Beatrice; his sister, Wynelle Deloney and her husband, John; his son, Steven Howard; and his son-in-law, Stuart Dean. A Celebration of Life will be held on Saturday, Sept. 21 at the First Baptist Church of Palm Coast located at 6050 Palm Coast Pkwy NW, Palm Coast, FL. Visitation will be at 9 a.m. and the service will be at 10 a.m. In lieu of flowers, the family asks that you consider donating to one of the following three in Wm Howard Allen, Jr's name. Gideons International -- gideons.org/donate Above & Beyond Building Fund at FBC of Palm Coast --FBCPC.org/give (in the donate message box write Above and Beyond in memory of Wm Howard Allen, Jr.) First Baptist Christian Academy -- 201 E Moody Blvd., Bunnell, FL 32110 (in the memo on your check please write "In Memory of Wm Howard Allen, Jr.)

William Howard Allen, Jr., 87, of Bunnell, FL passed away peacefully at home on September 18, 2019. He was born in Dodge County, Georgia on May 21, 1932 to Bill and Beatrice Allen. Howard was a devout Christian and an ordained deacon who loved... View Obituary & Service Information

The family of William Howard Allen created this Life Tributes page to make it easy to share your memories.

Send flowers to the Allen family.