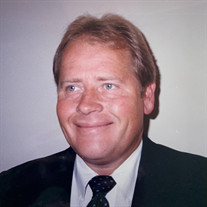 William Herbert “Bill” Anderson, 73, passed away in Palm Coast, FL on Sunday September 12, 2021 surrounded by family. William was born on March 5, 1948 in Miami, FL, the son of Herbert Anderson and Marie School Anderson. His survivors include his wife of 49 years, Terese “Terri” Bader Anderson; children, Steven Anderson, Joseph “Joey” Anderson (Heather Jahn); sister Jolana Anderson Dooling (Tim); as well as several nieces and nephews. William graduated from Miami Coral Park High School in 1967. After graduation he joined the US Marine Corps and was proud to earn his Paratrooper Wings. After his military duty he traveled to Michigan to visit relatives and it was there that he met his lifelong partner, Terri, in Kalamazoo. They were married on September 16, 1972. William began his career in Real Estate in Kalamazoo, MI. After 3 years he began working for Jewel Foods and quickly worked his way to upper management. He had strong leadership and training skills, a witty personality, and was respected by all who knew him. In 1986, William was offered a job with Toys R Us in Cutler Ridge, FL. His dream was always to return to FL so he moved his family to Key Largo, FL and commuted to Miami every day. After a year of retail insanity he decided to make an abrupt career change so he could spend more time with his family, especially his two young sons. William began the last stage of his career securing employment with the Monroe County Property Appraiser’s office in Plantation Key in October 1987. He earned his CFE (Certified Florida Evaluator) license in 1992 and was assigned as the office Supervisor. Health issues forced an early retirement in 2011 and Ervin Higgs, the Monroe County Property Appraiser at that time wrote, “You have so much of which to be proud, please know that your dedication to the Monroe County Property Appraiser’s Office, and to me personally, is among your greatest achievements and everyone who has worked with you, been assisted by you and served by you has attested to your professionalism and dedication.” William’s enjoyed his 25 years in the FL Keys the most. He renovated two homes while also finding time for yard work, taking the family fishing, boating, kayaking, snorkeling, scuba diving - especially spiny lobster harvesting, and relaxing with a margarita in his hot tub. Due to the tanking housing market and deteriorating health issues William and his wife Terri decided to move to Palm Coast FL in 2012 where he spent a quiet retirement. Funeral and burial will be private.

The family of William Herbert "Bill" Anderson created this Life Tributes page to make it easy to share your memories.