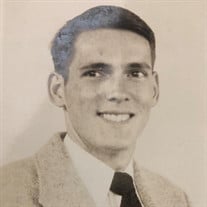 William “Bill” W. Beckett, 94, passed away at his home in Palm Coast, Florida on July 10, 2021. He was born in Sanford, Florida on December 29, 1926, son of late Nobel Clay Beckett and Winifred M. Beckett. Bill was a veteran of the United States Marine Corps and served during World War II. He graduated from Florida Southern College in Lakeland, Florida in 1947 with a BS in Agriculture. He chose agriculture because as a young boy his family was involved in the citrus business where Bill told stories of “hoeing orange trees for a penny a piece.” While attending at Florida State University he was a member of the Lambda Chi Alpha fraternity. He worked for US Steel and held a Broker’s License in realty for many years. Bill was a Christian man with strong faith and he would often say to people he met “Have a Jesus filled day!” He previously was a member of Victory Church in Lakeland, Florida and spent time ministering with fellow church members. He also enjoyed Pastor David Kravitz' services at Bethel Baptist Church in New Port Richey, Florida. He loved to travel, especially to Israel where he was baptized in the River of Jordan. Bill also enjoyed reading the Bible and spending time with his pet cat Sam. In addition to his parents, Bill was preceded in death by a sister Mildred M. Bekemeyer (Winter Garden), a brother Nobel C. Beckett, Jr. (Winter Garden), and previous marriages to Betty Beckett (Orlando) and Nina June Beckett (Lakeland). Bill is survived by wife Kristen of Palm Coast, Florida; daughters Beverly A. Beckett of Melbourne, Florida, Barbara Alene Beckett (Jerry) of Altamonte Springs, Florida; son William W. Beckett II (Cindy) of Winter Garden, Florida; stepsons Frances M. Liner (Judy) of Lutz, Florida, John L. Liner of Gainesville, Florida; stepdaughter April A. Kocher of Palm Coast, Florida; special niece Pamela Bloodworth (Jerry) of Clermont, Florida and many grandchildren and nieces and nephews. Thank you to the nurses and staff at Kindred Hospice of Palm Coast.

The family of William W Beckett created this Life Tributes page to make it easy to share your memories.

Send flowers to the Beckett family.