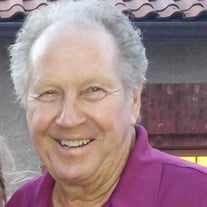 William S. (Sammy) Daniel, age 79, passed away Tuesday, September 10, 2019 in Macon, GA. He was a loving father, Grandfather and leaves behind a large family & many friends. He was born on December 5, 1939 in Newnan, GA and grew up in Atlanta, GA. In 1962 he and his first wife, Pennie, moved to St Augustine Beach where they would raise five children. He loved to travel, watch his children & grandchildren play sports, was an avid race car fan, and played softball for many years through the St. Johns County Rec League. He worked at Fairchild Aircraft (now the site of Grumman) before working for Mr. Dobbs as a specialist book binder for the Library of Congress. Years later, he owned Sammy Daniel’s Lawn Service until he moved to Hawkinsville, GA where he drove a school bus until he retired. Sammy was preceded in death by his parents W.Y. and Millie Daniel, granddaughter Ashley Daniel and grandson Dylan Barnlund. He is survived by his companion Sharon Rooney; his children, Keith (Tammy) Daniel, Karen (Larry) Hudgins, Kevin (Christine) Daniel, Kimbrough Daniel, Kristi Barnlund and adopted grandson Yussef Daniel; his sisters Becky Knowles, Kelly Mitchell, and brother Scotty Daniel. He had 12 grandchildren, 17 great-grandchildren, and many nieces, nephews and cousins. A graveside service will take place at 10:00 am on Saturday, September 14, 2019 at Pellicer Creek Cemetery, CR 204 with a Celebration of Life reception to follow at the VFW, 6184 US Hwy 1 South. Flowers can be sent to the funeral home or cemetery; or in lieu of flowers a donation made in his name, along with his granddaughters’ name Ashley Daniel, to Pink of the Pace. Heritage Funeral & Cremation Service, Bunnell, FL are in charge of arrangements.

William S. (Sammy) Daniel, age 79, passed away Tuesday, September 10, 2019 in Macon, GA. He was a loving father, Grandfather and leaves behind a large family & many friends. He was born on December 5, 1939 in Newnan, GA and grew up in Atlanta,... View Obituary & Service Information

The family of William "Sammy" Daniel created this Life Tributes page to make it easy to share your memories.

Send flowers to the Daniel family.