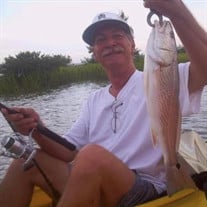 William Paul Hersey Sr. "Bill", 66, passed away on September 5, 2021 in St. Augustine, Florida. In death, he was comfortable and left this world in peace. Bill is a native Floridian and after high school graduation he entered the US Air Force in 1972, in which he served four years. After his military service he moved back home to Jacksonville, FL. Once his children were born he moved to St. Augustine, FL in 1986, where he lived the rest of his life. Bill retired from Northrop Grumman as a Senior Business Planner. In his adult years he loved golfing, antique refinishing, and fishing. Once retired, he bought a sailboat and lived on it for a decade in St. Augustine. Where he whittled wood, went fishing, made wonderful tasty seafood dishes, and took life easy. While living on his sailboat he was active in the community in downtown St. Augustine. In his retirement, he really took life gently, you could find Bill in his hammock at the boat, being next to the water and hunting for treasures. Bill enjoyed creating things with his hands and loved to tinker. His family and friends remember him having a great sense of humor and a wealth of wisdom. Bill would bring belly laughs out of everyone he met. He was preceded in death by his mother and father Annamae Hersey and Andrew Jesse Hersey. William is survived by his three children; whom he always boasted about with pride when given the opportunity; Christy Hersey, Cori Derringer, and William Hersey Jr. His eight grandchildren, who called him "Papa Jenkins", Patrick, Christian, Annamae, Christina, Sebastian, Sophia, Gabriella, and Jaxon. Memorial Service to be announced. Heritage Funeral and Cremation Service is assisting the family.

William Paul Hersey Sr. "Bill", 66, passed away on September 5, 2021 in St. Augustine, Florida. In death, he was comfortable and left this world in peace. Bill is a native Floridian and after high school graduation he entered the US Air Force... View Obituary & Service Information

The family of William Paul Hersey created this Life Tributes page to make it easy to share your memories.

Send flowers to the Hersey family.