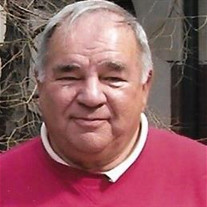 William A. “Bill” Ryan, Jr., 75, of Ormond Beach, FL passed away on December 2, 2018. Bill was born in Boone, IA on April 10, 1943. He was a 1961 graduate of Sacred Heart High School in Boone, IA and a 1965 graduate of Iowa State University with a BS in Chemical Engineering. In 1967 he married Barbara (Orr) Ryan and their union of 51 years blessed them with two daughters and three grandchildren. Bill was a registered Professional Engineer (P.E.). During his long and successful 45 year career in the engineering profession, Bill and Barbara lived in numerous cities across the US including Clinton, IA; Tulsa, OK; Eugene, OR; Winfield, LA; Chanhassen, MN; Santa Rosa, CA; Naperville, IL; Pittsburgh, PA; Cincinnati, OH; Atlanta, GA; Miami, FL; San Juan, PR; and Des Moines, IA. In addition to his many engineering projects he also provided leadership in various professional and civic organizations which included the Chanhassen Planning Commission and the Construction Industry Institute, where a role on the Strategic Implementation Committee involved extensive international travel and consulting which brought him great accomplishment. Bill was an avid bridge player. He achieved Regional Master status with the ACBL and was a member of the Palm Coast Duplicate Bridge Club while enjoying the Florida sunshine in his retirement. He was a Soduku wizard with an incredible wit and intellect. A loving and devoted husband, father and grandfather, Bill was happiest when he was connecting and visiting with his family. He will be greatly missed. Bill is preceded in death by his parents, Marie Lacey Ryan and William A. Ryan, Sr. He is survived by his wife Barbara; sisters Rosemary Cavalieri, Eileen (Bill) Vander Meer and Ruth Ryan; daughters Karen Ryan (Tim Lees) and Marilyn (Jim) Blair; and three grandchildren -- Brooke Blair, Jenna Blair and Violet Lees. A private memorial in Boone, IA will be held with close friends and family.

The family of William A. Ryan created this Life Tributes page to make it easy to share your memories.

Send flowers to the Ryan family.